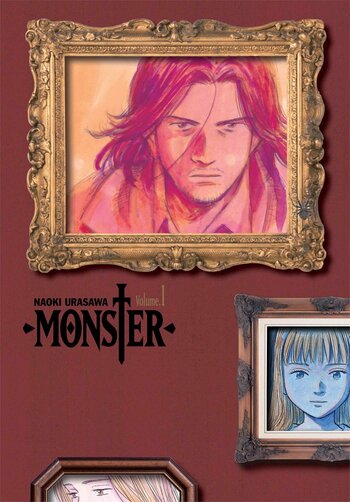 Naoki Urasawa's Monster is a series that is widely know in anime and manga communities, and thus probably doesn't really need an introduction. After all, it is one of the highest rated manga on this site (while the anime right now is in 128th place, the manga places 3rd in A-P's ratings). But what is it about?

Put very, very simply: Monster is about a fight of good versus evil. Of course, that doesn't really help much, since 98.7% of stories are about that kind of fight. But still, it tells the story of Doctor Kenzo Tenma, a brain surgeon in post-Cold War Germany, in his pursuit of Johan.

It all starts when Dr. Tenma decides to choose his principles over his career, by saving a litte boy instead of a VIP - because the boy came in first, and Tenma thinks of all lives as equal so the boy gets to go first. Of course, defying authority like that comes at a price: Tenma's career is ruined, and he loses his fiancée too. All he's left with is the knowledge that he did the right thing. Until he learns that maybe what he did wasn't so right after all...

It's very interesting to see the chain reaction caused by a kinda "ordinary" decision - the deaths of tons of people, and the misery of an equal amount of others. And thus starts Tenma's venture, trying to stop the madness he caused. The story is always high on tension, and the "side stories" - which all tie in into the main plot - always deliver something fresh: new characters, information, a storyline that's interesting on it's own, and some more development for established characters.

Which brings me to one of the greatest things about this manga: the characters. While the cast is huge, almost every character gets fleshed out in one way or another. They're all important to the plot, and feel very much alive - which makes it really hard to see bad things happen to them. Special shout-outs should go to Inspector Lunge - always an intriguing and mysterious guy - , Eva Heinemann - for not being just another nagging ex-fiancée - , and even more so to Johan. Johan is after all the Monster, the titular character, for a reason. (Or at least that's how interpret it) Representing everything that could make a human "evil" is a hard task, but Johan fulfills it wonderfully and he is definitely one of the most memorable manga-characters I know.

The characters drive the story further, until we get to a climax that gave me the chills. Everything got wrapped up neatly, which left me satisfied like a rich person who just went to some high-class restaurant.

After the content, I should probably also briefly talk about the presentation, aka the artwork. While not spectacular for the most part, it was consistently "good" to "very good", with some pages that were just great - mostly for nice scenery or depictions of scenes with heavy impact on the characters. The art worked nicely to create the atmosphere, and even out of context there are some pages that could be used as wallpapers.

Do you like thrillers, good stories and great characters? Then just go read this already!

Monster (モンスター Monsutā) sometimes referred to as "Naoki Urasawa's Monster" is a Japanese manga series written and illustrated by Naoki Urasawa. It was published by Shogakukan in their Big Comic Original magazine between 1994 and 2001, with the chapters collected and reprinted into 18 tankōbon volumes.

When a Doctor makes the highly controversial decision to save a boy's life over the mayor's, it leads to the loss of almost everything he holds dear. His fiance, his career, his social standing. The only thing he keeps is his own feeling of self worth, knowing that he did the right thing in saving the boy, who came in first. Yet even that is threatened when he begins to learn that nothing is as it originally appeared. A trail of bloodshed pointing to the seemingly innocent child leaves him questioning even his beliefs. Whether, in the end, all lives are ever truly equal.

As you can see from the synopsis above, Monster has a original, intriquing plot that sucks you straight in from the first chapter and never let's you go. However, mind you, this isn't some Shonen shluck (as much as I love those too), Monster never tries to capture the viewer with explosions or fanservice. Instead, it captures the viewer with the story's high tension, as well as emotional moments.

Some people say that the series beggins to drabble after Vol. 9. I personally think that the serie's is fresh and crisp from first page to the last. And speaking of the last page, several people say to have found the ending dissapointing, however I think that the ending gave the perfect emotional ending I was hoping for. It really shines off the more complex moral's of the story. Johan really isn't important, or evil, he's just an ordinary person who was push over due to certian events. The series true message is that a monster just as evil, or even moreso, than Johan's hides within us all, and with the right push, we could become just as bad as him. However, we still have a choice to make in the choice.

The art wasn't very special or even that memorable but it didn't really need to be. It served the story and served it well. The entire point of a manga is to tell a story, and the art did just that. It never hindered the story, or confused the reader, but it never amazed them either. It just did what is was meant to do.  You can't really fault something for doing what it was meant to do, so I guess that gives it a 8/10.

This I am sure deserved this grade. Monster brings a wide variety of characters that each are important to the story in their own way. No matter the screen time, none of the characters are two-dimensional. There is a chapter that introdduces two new characters that never appear again in the series. One of them is a Lawyer and the other is a Seceretary (readers of the series will know who I'm talking about.) Both of these characters are fully developed and go through the changes. Sure, they couldn't be the main character, but they are still relatable.

Monster is a great manga, if not the best, definitely one of them. Yes, it has flaws but everything does. This is definitely a must-read.

First of all, I'll like to praise the art style. It's truly god-tier, even though it is a 90's manga. The plot line is truly amazing. I could barely predict what would happen next. Coming to the characterization, naoki did an amazing job potraying them. The child characters are so relatable. I'll like to recommend it to anyone that likes classic manga.✌️

I found out about Monster some time ago, but simply didn't get the chance to read it through properly. And now that I have done so, I understand why this series continues to reign as one of the greatest masterpieces of Japanese manga. The storyline is extremely suspenseful, with the titular 'Monster' Johan shrouded in mystery; as we move along, the unfolding of events one at a time really keeps one on one's toes for what might occur next as part of Johan's grand plan.

There were some instances during which I felt a little confused at where the story would go, but I think this was primarily due to Johan's change in ambitions. However, all the sceptism I had dissipated as I reached the concluding arc, which no doubt tied everything up in a very satisfying manner. Not only did Dr. Tenma have to make a final morally-grounded decision which brings the storyline back round to a circle; Inspector Lunge from the BKA also finally acknowledges his flawed(?) logical thinking process.

The characters were very endearing, and Johan himself terrifying. I especially liked the portrayals of Dr. Tenma, Mr. Grimmer and Eva Heinemann's character development. The art was good, but I had issues distinguishing between many side characters as the story progressed. The non-linear storytelling can also be confusing so that might be something to watch out for. But otherwise, it was a great read and I think I will check out the anime very soon.

The story of Monster follows an enthusiastic, naive doctor named Dr. Teams who makes a decision to save a life, as all doctors do. Only that decision turns out to have dire consequences when he realizes that the life he saved is that of a psychopathic young man. Tenma them sets out on a journey to undue the damage: to kill what he saved.  It's honestly a fantastic premise and the only reason I gave it a 9/10 instead of a 10/10 is because I don't know how I felt about the ending.

The art is an interesting topic... The backgrounds were awesome and super accurate in terms of landscapes, but the side characters tended to all blur together. I became confused about who was who later on in the series due to villains beginning to look alike. The main characters were easily distinguishable, though.

The characters are absolutely fantastic. Johan, the main antagonist, had a lot of layers to him that kept him interesting. I loved the argument of wondering if monsters are created to be as they are or if they're just born this way. Tenma was also a great character who kept surprising the reader at every turn. Many of the side characters were also very fleshed out with objectives and desires of their own.

Overall, this manga has been dubbed a classic for a reason. It's one where you have to dive a little deep to decipher some of the hidden meanings, but that's what makes it fun.

My personal enjoyment of this manga was off the charts. I stayed up for nights reading it and wouldn't erase that experience for anything. It reignited my love of anime and manga.