Alt title: The World is Full of Monsters Now, Therefore I Want to Live as I Wish. 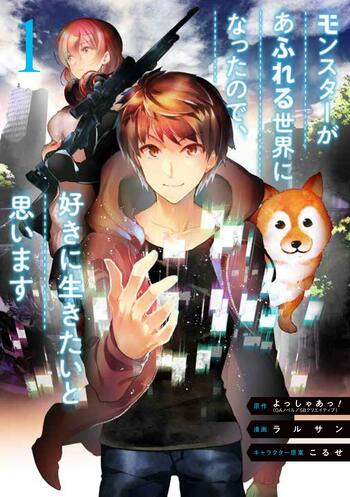 This manga is really good! Basically before anyone knew, the world has changed into that of an isekai or a game-like world full of monsters and where levels, skills, and status exist.

This is an adventure where the modern world becomes fantasy and where the main protagonist has to strive hard for his survival,

The story is awesome. we normally only see reincarnated or summoned people to another world but this case is completely different, there's no truck-kun or the like.

The characters development and growth are explendid. You can clearly see the change on their mentality as well as secondaries characters distinct features, as for the MC is not a coward in fact he's really smart but oesn't run to danger like a full and is not OP he just thinks and a special think is that his companion is a dog that also has powers and is almost OP wich is very interesting

so the story is a little more realistic than some other apocalyptic world stories because the MC is less courageous than most othe mc of this genre. people in the comment of the manga said he is dumb and cowardly. but think about it if you were in this situation you would probably do some of the "dumb and cowardly" things he did.