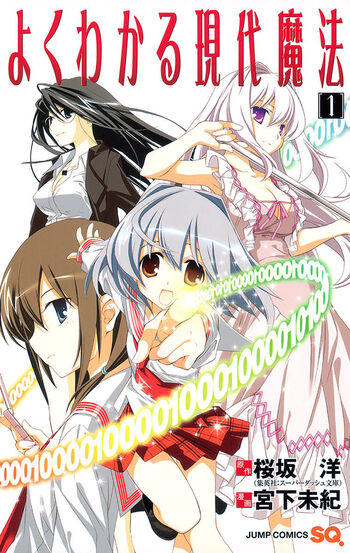 Oz the Wizard is a young high school magician, who is powerful yet perverted. True to his desires, Oz summons and claims “ownership” of one of the rare Succubus, one who goes by the name Roselie. But, even though he summoned her for the purpose of doing all the perverted activities of his dreams, Roseli states that because she has an immense amount of “seductive mana,” anyone who touches her bare skin for more than 10 seconds will die. What is the use of a supposed-to-be lustful Succubus if you can’t even touch her for longer than 10 seconds? Will Oz be able to find a way to get rid of this obstacle?

The story begins when a high school student named Haruaki Yachi receives a mysterious, super-heavy black cube from his father overseas. That night, Haruaki wakes up to a suspicious noise in the kitchen, and he discovers a "fully naked female thief of rice crackers." The girl, Fear, is the first of several surprises that Haruaki receives.

A prestigious school where only girls can attend- Winebirds Royal Magic Academy. A boy visited there. His name is Noah. It was called as the first male student to co-educate the school. Then, he started living together with a problematic beautiful girl, Anya. However, his pure smile and non-pure tentacles created various ripples in the school...!!!

Lina Inverse is an irresistable sorceress in search of treasure and a good meal. She'd probably be successful if it weren't for her dim-witted companion, Naga the White Serpant. Join Lina and Naga as they make headlines, fight prejudice and meet the prince of Seyruun City.

After the conclusion of the Nine School Competition, summer arrives in force, bringing with it that most precious salvation for students--vacation! Shizuku invites Tatsuya, Miyuki, and their friends to her family's island villa for a bit of fun in the sun, but all of this is just a pretext to set the perfect tropical stage for Honoka's romance. Meanwhile, the ace of Third High, Masaki, entertains Kichijouji at home, unaware of his partner's struggle with self-doubt. Shun finds himself playing bodyguard to a beautiful foreigner, and Eimi is cornered for a secret she can't reveal at any cost. The one who's got it toughest, though, is Mayumi, who's desperate to find the next student council president before time runs out!

Mako-chan is striving to become a professional witch, but before she can graduate from school, she must travel to the human world to complete her studies. It is there she meets a lewd young man named Onodera Junji, whose intentions for Mako-chan are far from pure! Can Mako-chan’s magical skills transform a pervert like Junji into a good person or is her witchy career over before it’s begun?!

Reaching the end of his college years, trying to find a job, Sakurazaka Kouhei was reaching the end of his rope. Months were dragging by, with no job offers in sight. If he didn't find something soon, he would have to go home and take over the family business. Then he spotted it. Suruga Systems Corporation, a small data processing company. On their job-wanted posting: "You seek possibilities you cannot see yet." Accepted at once for the job, little did he know what he was getting into.