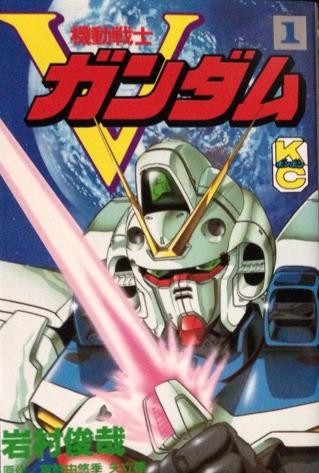 This manga series focuses on Fereshte, an autonomous branch of Celestial Being that is also in possession of several previous generation Gundams.

The Calamity War that engulfed all of Earth, and the Gundams deployed then which were said to have brought it to an end. 300 years later, some have been hidden, some abandoned. Argie Mirage, a boy who carries the past of his family's death at the hands of a Gundam, meets Volco Warren, a boy who wishes to rebuild the Gundam his family left behind.To destroy a Gundam. To rebuild a Gundam. In the midst of the two boys' intersecting fates, the Astaroth will awaken from its 300 year slumber.

Iris Orlando is a scientist from Anaheim Electronics who is a mobile suit developer attached to the F91 project. Protagonist Tokio Randall is a Gundam-piloting hero. The events unravel to reveal a conspiracy between Anaheim and the Earth Federation, along the way the Crossbone Vanguard is pulled into the events and ends up battling against the test pilots from Anaheim.

During a contest to win rights to salvage and perform shows in the Sea of Lorelei, Rick Aller rescues Rosa the Second (Rosa II) when her mercenary crew turn on her. With her mobile suit damaged, and his own small mobile armor damaged as well, they hide inside a sunken submarine that has been resting on the ocean floor since the 7th Space War. While investigating the ship they discover a black GX-9900 Gundam X and decide to use the mobile suit to escape in. But when they open the cockpit they discover the pilot of the mobile suit is still inside of it and in a state of suspended animation. Awakening him they make their escape from the ship and defeat the mercenaries that turned on Rosa II.

After a generation of warfare, the Gundam boys finally secured a peace between Earth and the colonies by helping to defeat the Oz and White Fang armies. Now, out of the rubble, the surviving soldiers are re-emerging and clustering together into new factions. Heero Yuy has become a vigilante pacifist, tracking down weapons stashes and destroying them, while Relena, former Queen of the Earth Sphere, tries to maintain the peace politically. But an unmanned weapons factory has been discovered somewhere near Mars, and now the boys are going to have to dust off their mechs for one more battle to save the tenuous peace.

Fighting to preserve the era of peace, Heero, Wufei, Duo, Trowa, Quatre, and Relena must also work to protect the Gundams from a mysterious group that wishes to control them for their own nefarious purposes.

Oldrin, who disappeared a while before, now attends Pendleton School of Madrid. And Orpheus, now Liar, is appointed as the Head Knight of the Glinda Knights.