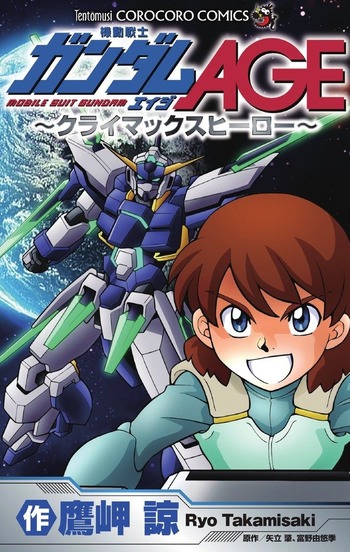 If you're looking for anime similar to Mobile Suit Gundam AGE: Climax Hero, you might like these titles.

Having defeated Logos and the Earth Alliance, the triumphant Chairman Durandal now reveals his ultimate plan for humanity. The world reacts with confusion and horror to the details of the Destiny Plan, but Durandal has come too far to let anyone stand in the way of his dream of eternal peace and happiness. Using the weapons of his fallen enemies, the Chairman demonstrates that he will stop at nothing to create his new world. The Archangel and its allies are now humanity's last hope to prevent Durandal from carrying out his plans. Once again, a fierce battle begins around the Requiem cannon and its relay stations, and the Gundam pilots meet in a final confrontation over the lunar surface. Shinn against Athrun, Kira against Rey, Archangel against Minerva... In the end, there can be only one victor.

Gathering their forces in the Mediterranean Sea, the Earth Alliance and Orb Union fleets launch a second attack on the Minerva, and this time not even the Archangel's intervention can halt the fighting. While Shinn unleashes his anger against the Orb fleet, Kira and Athrun confront each another in battle, and one of these lifelong friends falls in defeat. Back in the PLANT homeland, Chairman Durandal thinks back on his past and considers his plans for the future... plans which will require the removal of disruptive elements like Lacus and the Archangel crew. In the aftermath of the battle, Shinn reaches a fateful ecision. Stella, the enemy pilot he once promised to protect, is now a captive aboard the Minerva. Stella's physical condition is rapidly deteriorating, and Shinn will have to betray everything he believes in order to save her life.

The Minerva docks at a ZAFT base, where they are met by Chairman Durandal. Over a quiet dinner, he talks with Athrun, Shinn and other members of the crew. This conversation leads Shinn to reflect on the past, and the events that brought them to where they are now. But understanding does not bring peace, and after another argument with some of his shipmates, Shinn heads ashore to clear his head. There he meets a beautiful girl, and watches her fall into the ocean. He dives in to rescue her, and in turn then must wait to be rescued. Meanwhile, the Alliance Forces gather, along with their Orb Allies, to launch an attack on ZAFT. The Minerva scrambles and prepares for battle. But unknown to either side, far beneath the waves, another group is going to try to put an end to the fighting.

The year is Cosmic Era 73. The Bloody Valentine War, fought between the PLANTS space colonies and the nations of the Atlantic Federation, has ended and an uneasy truce has settled upon the Earth sphere. With the signing of the Junius Seven Treaty, the world's soldiers have left the battlefield and the grizzly sights of war behind. Many who fought now seek peace and refuge in the shelter of civilian life. But one boy, Shin Asuka, is finding that incredibly hard. A coordinator who lost his entire family during the Battle of Orb, he now fights with ZAFT in one of their newest machines, the Impulse Gundam. Of course, ZAFT is only developing these machines for defensive applications - or so they claim - but when a group of Federation operatives steal some of these prototype machines, the world is once again plunged towards war.

Lowe Gear is a member of the Junk Guild, and made a stop to Earth for an auction. Amazed by a beam weapon made by ZAFT, Lowe bought the head of a BuCUE suit and discovered some top secret information! But danger lurks elsewhere in the Cosmic Era, not only to Lowe, but to Gai as well. As Gai helps Serpent Tail mercenaries to trap an antique model of a Ginn, he finds himself in pinch while meeting Ed The Ripper in the middle of space. How can the two of them play it safe while enemies continuously seek them to battle?

A reiteration of the final episode of Gundam Seed Destiny where a massive fight ensues over the future of Orb and mankind's right to choose what destiny they lead.

In the neutral city A'koba the Baralant military uses robot gladiator fights to test battle robots before they are used in real wars. Chirico Cuvie a previous Red Shoulder from the Melkia military and some friends are trying to steal jijirium from Karman Tomus a former technological officer from the Melkia military. Chirico needs it to save his woman, Fyana who is a Gilgamesh PS. Karman Tomus is also looking for the PS Fyana. When Fyana is kidnapped Chirico is forced to fight the local robot battle champion, Niva and the Balarant military who is trying to create their own PS. Niva has a personal grudge against Red Shoulders because he was beaten by them at the fields of Orom. Niva was tried turned into a PS, and thus also hates Fyana. Niva turns Fyana against Chirico and the fight gets much more difficult, since Fyana must not be harmed.