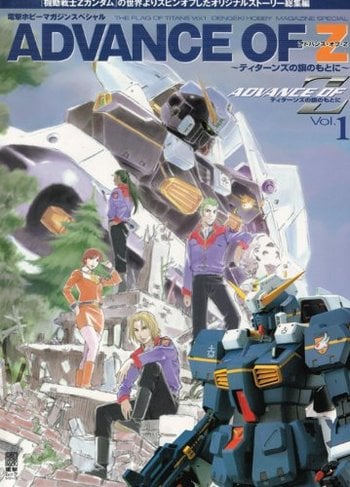 If you're looking for manga similar to Mobile Suit Gundam: Advance of Zeta - The Flag of Titans (Light Novel), you might like these titles.

The series takes place in the year 2400, where the world is controlled by the "Solar System Alliance." The reason the Alliance was able to take control is because they wield mobile weapons. Those humanoid weapons use "Cyclonics" electric chips that convert the superpowers and wisdom bequeathed to mankind into interference power. These humanoid weapons which amplify their pilot's psychic powers are called "Titanic DOWLs," or just "DOWLs" (Defender Operated by Wired Linkage). DOWLs do not lose to other weapons, and are part of the Solar System Alliance's unit, "Sophia," who keep the world under the Alliance's thumb. However, this will soon change when two DOWL Masters—Aoi Saotome and Reine Ward Takajou—have a fateful meeting at a high school in an aerial city.

AD 2070, more than half a century has passed since the humans first got attacked by the mysterious living entity known as "Mariss". But the spirit of Celen, the pilot of Destblum, the only Heavy Weapon that can possibly oppose Mariss, has been repeatedly sapped by the hopelessness of battle. Before going out for a sortie, she had been captured for scheming to escape, and was forcibly made to sortie on the battlefield. But, on that day, a miracle fell onto the battlefield. A mysterious Fighter from an unknown nationality appeared with a Super Weapon not obtainable from this world and purged Mariss. The humans were roused. Even then, the Pilot that came out from that Fighter was a carbon copy of Eirun Bazatt, the Pilot in the hugely popular anime "Doll Waltz Requiem"-!?

Third class citizen Hibiki from the male-only planet of Taraak sneaks aboard the extra large battleship Ikazuchi as a result of unusual circumstances. However, it comes under attack from the Magno’s Family pirates from the female-only planet of Majere! It is Hibiki’s first encounter with those who are said to ‘eat men’s innards’ but..

Cosmic Era 70: The genetically enhanced Coordinators (ZAFT) and the biologically unaltered Naturals (Earth Alliance Force) are at war. A shy young student named Kira Yamato is thrown in the midst of battle when ZAFT steals five new Earth Force secret weapons. Desiring only to protect his Natural friends, Kira embraces his Coordinator abilities and pilots the mobile suit Strike. In this novelization of the sophisticated television series, the hopes and fears of a new generation clash with the greatest weapons developed by mankind: Gundam.