Mobile Suit Gundam 00: A Wakening of the Trailblazer - Recommendations

Alt title: Kidou Senshi Gundam 00: A Wakening of the Trailblazer 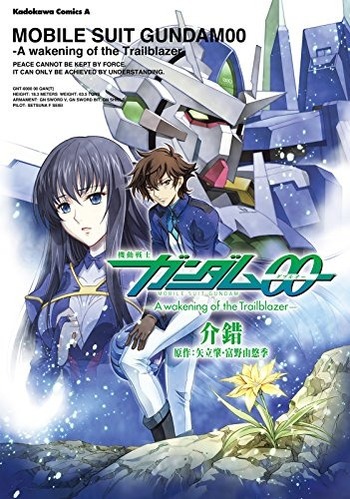 If you're looking for manga similar to Mobile Suit Gundam 00: A Wakening of the Trailblazer, you might like these titles.

Leif Recitativo was ordered by Veda to gather a group of living bio-terminals called Innovades. But members of Celestial Being's shadow group Fereshte (which is now disbanded and rejoined the main organization) reappears.

At the same time Slaine and Trillram went down to New Awara where Inaho and the others were up in Sapporo, Hokkaido. Twin Martian Knights sisters who pilot a Kataphrakt unit from the Vers Empire were landing in the town where the twin siblings Mizuki and Haruya Mikage live...

In 1945, at the close of the Pacific War, an invasion beset the planet Earth. Droves of Phantom Beasts - aliens from another world - landed and waged war against man. Humanity was forced to unite and fight this common threat, but years later, in present times, the death toll has depleted the military forces, leaving Japan with no choice: They must enlist the help of teenagers. Atsushi Hayami is among those who, rather than lead a normal high-school life, must take up arms to ensure the survival of mankind.