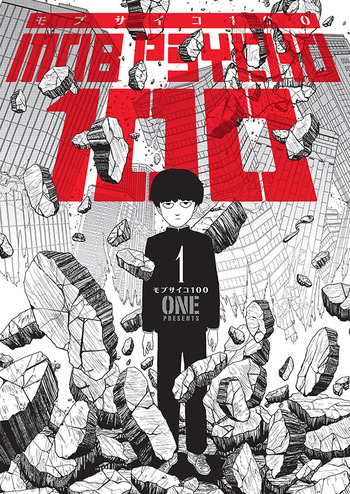 I'm surprised that there weren't any reviews of the manga considering there are over 100 chapters of ~40 pages apiece or so. It's taken about 2-3 weeks of reading 4-5 hours a day and 4-5 days a week. My reader was missing a huge chunk of the chp. 90 boss fight. Again it is a good manga but not what I would call groundbreaking or engrossing. I read OPM first (Manga, Anime, Webcomic) then MP100 (Manga, Anime), and I prefer OPM by leaps and bounds I prefer beat-em-ups to this psychic thing.

The anime's first "arc" follows the manga's first arc word for word just like OPM, which I prefer for manga to anime adaptations, as that is what made the series good. There are 2 more arcs before we reach where the manga's at the Boss of Claw Fight, the Broccoli Tree Arc, and now the Love Arc. There's a lot, but as it is right now I may not continue the series till it finishes, as it's not really holding my interest. It's worth multiple{2 IMO} reads as you may pick up on things that you didn't see the first time around. Yep so I just finished the series and it's as I feared it's shit I mean I can't really describe how bad it is it's just very disappointing not exciting in the least, it's just blah.

"Mob Pyscho-100" is along the same lines as "One Punch Man". Both of the MC's are overpowered, however "Mob Pyscho-100" focuses on excorism, ghosts, and supernatural elements. The MC is a general airhead who wants to live a normal schoo life, while using his excorism powers for "good".

The story follows the adventures of the MC and his master, Reigan.

The art is very "Action Based", with the artstyle being able to compliment the fight scenes more than the rest.

The MC is almost similar in every single way to Saitama from "One Punch Man". Interested in Saturday Bargain Sales, living a peaceful life, etc.

This manga is a good read and contains many good fights and so, however is very similar to "One Punch Man". Sometimes I feel that "Mob Pyscho-100" is just rip off of "One Punch Man" by the same author, but have its theme be supernatural rather than "Awakeners" theme.

Thanks for reading my review!

Surprised at the lack of reviews on this but this is really good and worth time to read. The characters, especially reigen and mob are really well written and felt geniune. While the art isn't the best in the world, it doesn't need to be because the characters shine through and the story helps the characters shine even brighter. The last arc especially just hits. This is my first review so its not super detailed but i just had to review this. Please read it and give it a chance, you will not regret it.