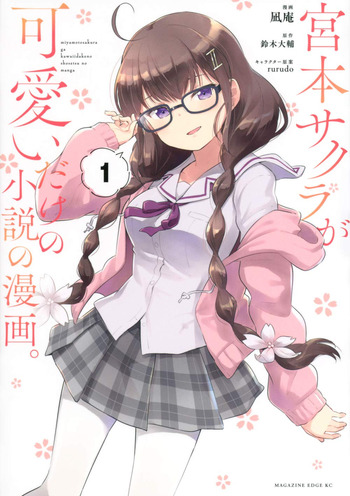 If you're looking for anime similar to Miyamoto Sakura ga Kawaii dake no Shousetsu no Manga., you might like these titles.

Masamune Izumi is a high school student who writes light novels. Sagiri Izumi is a shut-in who never leaves her room. A year ago, she became Masamune’s little sister. But one day, Masamune discovers a shocking twist—The artist "Eromanga Sensei," who has been drawing illustrations for his novels, is none other than his little sister Sagiri! His cute little shut-in of a sister, who has been living under his roof, is using an obscene pen name and draws lewd illustrations?!

Kouta Tsuchiya may just be known as Muttsurini, the perverted boy with a passion for taking photos of the girls’ panties, but in truth he is a special agent for Mission Impossible Baka, an agency that takes on any job no matter how difficult. Receiving his orders via self-destructing audio cassette dispatched from bizarre locations, Muttsurini must use his daring and intellect to gather the photographs required, even if it means casting his pride aside.

A Sister's All You Need

Every day is full of fun. But something is missing. "My life would be amazing if only I had a little sister. Why don’t I have a little sister...?" These are the musings of little sister-lover and novelist Itsuki Hashima, who only writes works featuring little sisters. Around him gather a number of unique people: genius author/pervert Nayuta, female college student Miyako, illustrator Puriketsu, and the brutish tax accountant Ashley. Each of them hold their own worries, but live their peaceful daily lives while writing novels, playing video games, drinking alcohol, and filing their tax returns.