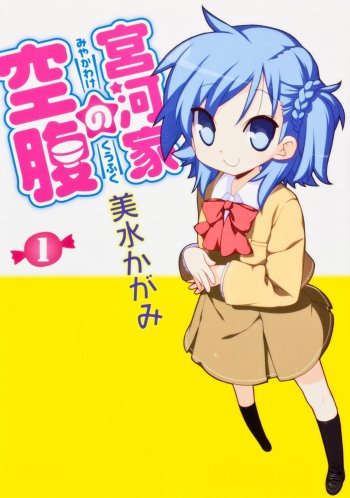 I should definitely note that I haven't read Lucky Star, so if there are any subtle references to that series within this spin-off I for sure missed them. Though from what I gathered, the two sisters in this manga were first created for a Lucky Star game and not for the manga itself. Hikage is an elementary schooler who tries feir best to manage the budget while feir older sister Hinata buys impractical things like doujinshi, video games, and collectibles. Their parents aren't on the scene.

It's pretty easy to read, though about halfway through it starts losing my attention a little bit. It's not laugh-out-loud funny. In fact, I would barely consider it funny at all. We see Hikage at home with feir sister and at school with feir teacher and other students, and that's basically it. There's a recurring joke where some traditionally cheap food item will be mentioned and Hikage will think to femself that even that is too expensive for their budget. As an example, at one point a boy in class mocks her poverty by saying that fe probably doesn't worry about the expiration date on some sauce or something, and fe thinks to femself that fe's never even owned that type of sauce so how could fe worry about the expiration date. Though for how much this manga focuses on poverty greatly limiting their dietary choices, it doesn't make very clear what they do eat on a day to day basis. I thought the characters were pretty likable.