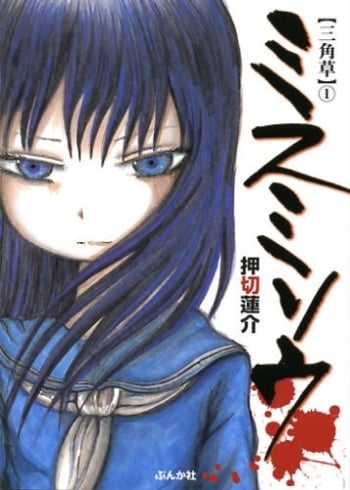 My first impression was that it would be a stereotypical revenge story, but I enjoyed it. I also found the reason for the name of the manga interesting. The ending was the only one would have worked with it being about revenge. (Buckle up for my horribly written spoiler free review).

-Story: It was a coherent story from start to finish.The themes of the story were tragedy, bullying, and revenge. How bullying affects people. How grief can affect people. What could happen if bullying went too far. The affect peer pressure can have. How cruel children and adults can be. How revenge is a cycle that will never end. Overall, it painted an unforgiving view of the world.

-Art: The character design wasn't bad but not overly detailed. It might not be to my standards, but it worked for the manga. It expressed the emotions the characters felt. It wasn't jarring and worked to develop the story. The backgrounds were used to set the tone and were nice enough. The paneling was used to exaggerate the horrific events of the manga. (I've spoiled by Berserk, Vinland saga, and Junji Itou).

A girl has been bullied throughout her last year of school, before her graduation. She hopes to wait patiently until it ends. If only things were that easy.

There's an ugly sense of realism in this manga if you look past the ridiculous and edgy violence.

A revenge manga that doesn't glorify revenge is a revenge story done well. It's frustrating, but it's a reflection of real life. Is Misumisou exaggerated? Dramatised? Sure, a lot of the violence present feels unnecessary and too much at times, and the facial expressions of its characters only act to serve in its seemingly obnoxious edginess. Nevertheless, it's in this exaggeration that accurately depicts the ugliness of revenge. It's been shown time and time again that revenge doesn't bring anything positive for the victim. It doesn't rewind time nor does it resurrect the dead. It's a temporarily satisfying feeling, and in this case, none of it was satisfying for the protagonist, Haruka.

Rensuke Oshikiri creates an ugly and tragic story of Haruka, bullied and pushed to the brink of her sanity. She doesn't feel anything besides pain. Even when the revenge portion of this story begins, it's nothing but hurt. The seemingly low quality art style greatly emphasises this feeling, depicting a bleak and fleeting environment. The setting, a town with a decreasing population, work to visualise the emptiness and meaningless view of life. Misumisou is anything but happy.

Haruka is a victim, and so is everyone else to a certain degree. Every one of the bullies get their own tragic backstory that works to effectively create a moral standstill between them and the victim. When they get their just karma, it never feels fulfilling, and Oshikiri conveys this feeling well through Haruka's unfazed and unsatisfied mannerism. Bullying is something anyone can relate to, whether it be physically or verbally, and while Misimisou seems like a fantasy compared to everyday real life, it's not a stretch to say that it CAN happen. Maybe not in a fictionalized manga, but there's a reason school shootings exist and a lack of action from the school system only enables this pattern of tragedy.

Revenge and bullying are ugly topics, but Misumisou is able to give a gripping and suspenseful story surrounding these themes, never shying away from the extreme but still always being grounded in reality. It's painful, but it's in this pain that makes it worth a read.

The drawings were awful.

I liked this manga, you get a really stereotypical story about a bullied girl, although it has its twists and turns, it ends with revenge, a very satisfactory one, at that.

The characters are kinda meh, not that interesting.

It got its live action movie too, so be sure to watch that!