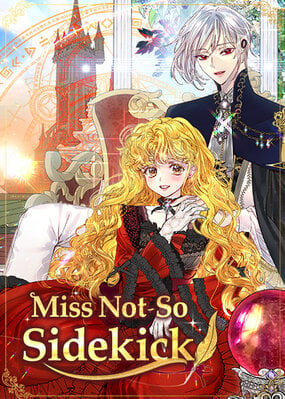 A really good manga! The female lead is so funny and she isn't dumb like other female leads. At first I didnt read it because I thought it was a reverse harem but its not in the end. A really funny manhwa with some really cute romance! :3 edit 2021/01/13: ohmygod this manhwa keeps getting better! The author is starting to wrap the story up and the end is literally the most perfect ending. edit april 25 2021: the story's over! to anyone reading this, please give this manhwa a shot ^^

Miss Not-So Sidekick is about twenty-five year old Hyejung who escapes the stress of her daily life by reading. Or rather, that was her life up until the day she woke up as a character in her favorite novel series. And a minor side character villian at that. Her new name is Latte Ectrie, the daughter of a Viscount and she is determined to get front row seats to watch the series play out up close and personal, with popcorn in hand to watch the drama unfold in front of her. Determined to have the best seat possible she befriends the heroine Ibelin and uses her status as friend of the heroine to bait and tease two of the three love interests of the heroine, the Prince and the Duke, though she tiptoes around the third love interest Arwin, the master of the Magic Tower, who was known for his violent nature. The funny thing is... Arwin isn't following the plot like he should have been and why does he keep messing with her? Has he jumped ship? What's going on? I thought the plot sounded entertaining, if a bit overused, but since I enjoy isekai for the most part I thought 'why the hell not?' My expectations fell remarkably low after the first chapter or so, but when she meets the Duke for the first time... the hilarity of the meeting won me over fully and I was laughing myself to tears! x'D OMG, that was the BEST! x'D Latte is a take no prisoners, sarcastic, viciously hilarious, overly dramatic, comedic gem! I can totally see why Arwin is drawn to her rather than Ibelin as Latte makes him laugh and is the single most entertaining person in the entirety of that novel world. Holy crap, but the trouble she gets herself into and the funny situations she stumbles into! x'D The best part is that she's totally oblivious that he's interested more in her than Ibelin (takes her something like 117-ish chapter to realize she has feeling for Arwin and it takes him almost as long to realize what he's feeling for her is love lol). Not only that, but she, and all us readers, are getting mighty suspicious of the 'heroine' Ibelin because something is off about her (because I can't be the only one who thinks so... right?).    While the plot doesn't hit you in the gut, the comedy does (or rather it really hits you after Latte meets the Duke lol) and it's what will have you snickering or outright laughing each and every chapter as you demand more (I want more, so much more. Especially Arwin and Latte lol)! From Latte's secret job, to her invention of popcorn, to her inner ramblings, or outer antics the series has kept me thoroughly entertained and wanting to know what happens next! I love Latte's expressions and her encounters with the Duke are just... funny as hell! x'D Her encounters with Arwin though are the best and I adore how confusing she finds him as she tries not to piss him off all the while all he does is seem to deliberately piss her off! x'D Honestly, the series is actually far better than I thought it would be while at the same time being absolutely nothing like I thought! If you decide to read this series, don't expect in your face romance because it's very subtle for the vast majority of the series (*Spoiler* hell they don't actually kiss until chapter 127 *End Spoiler*), but the comedy is in your face and will leave you either snickering, or laughing like a crazy person (or a little of both, as that's me! :D). Anyway, this is definitely a series that I've enjoyed and am absolutely going to keep up with! I HIGHLY recommend this series for people who love comedy manhwa with the barest hint of romance! (well, for the majority of the series anyway) ^Latte, Arwin, and her 'Avatar' x'D

*Ch92 of webtoon, and read some of the novel spoilers This isn't your typical isekai/otome.  Art: It looks nice, but it's very memey. The leads are all drawn as overly beautiful, as per the story's specifications. Latte herself is drawn prettily in more of a plain way. The way the story is drawn has a role itself, which was unique and fun, but it might not be to everyone's taste. Many characters have scenes where they make gruesome/meme faces, and it's actually entertaining to see the art rapidly swing between styles. Characters: Like some other otome isekai stories, characterse are predetermined to act out their story. It's no different in this one: villains are villains and heroes are heroes.The story itself pokes fun this fact by giving the leads normal names while naming our MC and one of her friends as "Latte" and "Ameri Cano" and other NPCs after household items or obvious role names. However, we see deviations of this storyline as Latte inserts herself throughout it. We see the motivations behind the characters and how they begin to flesh out once they're no longer confined to the original storyline. I liked that their past background DID make up who they were and weren't instantaneously different from the get go. Story: Hyejung, our typical MC who has bleak prospects in life, magically finds herself inside her favorite romance story as not the heroine, not the villanness, but a random side character named Latte. She's reincarnated about 10 years before the start of the novel and no matter how she tries, she can't find the Male Leads so she resolves to spend her days eating food and writing stories until the Female Lead makes her appearance and the story starts. The bulk of the manhwa is Latte self inserting herself into any scenes with the FL and MLs in order to "increase" her screen time and as a sort of way to guarantee her safety as the FL obviously would never come into any real dangers. MC's past life gets mentioned sometimes, but like all the other isekai, that backstory is thrown to the way side almost immediately.  The manhwa doesn't desolve into the trope where all the MLs fall in love with the MC right away. FL's own romances are seen as superficial and "only part of the story" by MC. MC, understandably after her 10 fruitless years, doesn't believe she will come by any of her love. For those of you who are looking for romance, there IS romance, but only after 50+ chapters. There are hints of romance for the MC here and there scattered around, but ultimately this story doesn't focus on romance in the beginning and more on comedy and world building. You will notice very early on that it makes fun of a lot of the typical tropes in this genre, like why MLs even fall so easily in love with FL or the MLs' blinding beauty, and as the story progresses, it actually develops more of the MLs so they aren't just carciatures created for loving FL. The story has tons of side tangents, references plenty of popular pop culture, and memes that always keep the story light hearted so it never gets too serious. I actually thought that because of its self-deprecating humor, all the characters and story seemed more realistic. So if you like romance and fantasy, and don't like or even like that the story doesn't take itself too seriously, this story would be perfect for you. 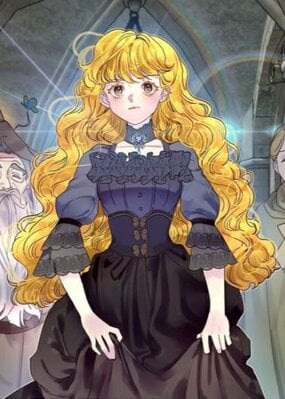