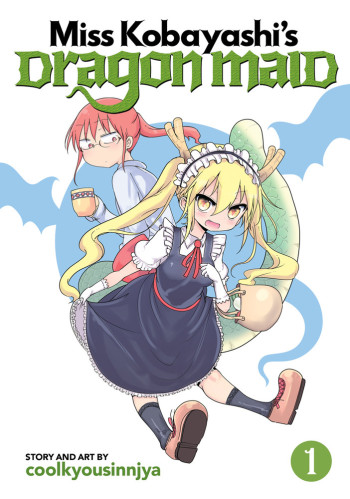 As much as I love the anime adaption of Miss Kobayashi's Dragon Maid, I can't really say the same about the original manga. I am aware of the fact that the manga was written by an author notorious for his ecchi work, but reading the manga version of Dragon Maid honestly made me a little uncomfortable. Many had complained how the scene in episode 6 of the show was too risque as it involved two young girls - Kanna and Saikawa respectively - engaging in actions that seem...a little too much. However, the manga version? It seemed more outright about what Kanna was wanting to do with Saikawa. It isn't helped by the fact that a few chapters later, Saikawa arrives to Kobayashi's house hoping to continue where she and Kanna left off when she thought that she was home alone with Kanna.

One of the main differences between the manga and anime adaptations is the presence of another dragon girl: Iruru, or Ilulu. Iruru was a dragon who arrived to the town in one of the previous chapters intending to lay waste to it. Her backstory is explored more in the subsequent chapters where we learn that she grew to despise humans because her parents were killed by some. So she eventually redeems herself and goes to live with Kobayashi and the others. However, her story arc is adapted out of the anime version for a few obvious reasons. For one, Iruru looks roughly around the same age and height as Kanna. However, she has a large pair of knockers plastered on her chest. Worse, Tohru offhandedly mentions that if Iruru were to get further relaxed, her already gargantuan melons would triple in size. So, yes...you have a loli character with large breasts. Well part of it has to do with how she has difficulty with controlling her shapeshifting, but that doesn't mean much. So, Iruru befriends Saikawa, and even allows Saikawa to fondle her. That's not even getting into how thrilled Saikawa is at the concept of touching her large melons. Keep in mind that she's elementary school-aged. Just...no.

Besides that, Lucoa herself just feels more predatory in the manga as well. You already have her questionable scenes with Shouta in the show, but in the manga....she's even MORE sketchy. She still does the usual schtick: bathing with Shouta, sleeping with Shouta, and all that. But in one of the latest chapters, Shouta wakes up to find that she was on top of him, stark naked. She tries to pass this off as thinking that Shouta was cold so she decided to warm him up with her body instead of getting a blanket, but.....Lucoa has no sense of personal space. Seriously, the parents are okay with what Lucoa's doing to their son, or are they really that useless? That, and the manga does actually go into more detail about how Lucoa was driven from her goddess seat (she drank cursed alcohol and violated her younger sister). Overall, Lucoa just comes off as being a borderline child molester.

As for the illustrations...I don't know. Something just feels wrong with the illustrations. One of the reasons as to why I loved the anime adaptation was because the animation style gave off a soft and fluffy tone. It could be downright adorable at times. Even when the dragons would be in their true forms, they would still mend well with the cutesy feel of the show. With the manga, however, the dragons seemed more hideous and nightmarish. Especially whenever they did a closeup of the dragons....they just looked so ugly. I get that they are supposed to be scary looking, but I feel that because of that, it doesn't bode well with the overall comedic tone of the manga.

So in short, while I love the anime adaptation and watch it fondly, I can't really say that I could love the manga because it has a more risque tone that I find unsettling, and the artwork can be hideous at times. That's not even getting into how sometimes there would be words missing in some chapters. Maybe's it's the result of bad translation, but I always feel that some chapters would be lacking because of it. Of course, that doesn't mean that anyone shouldn't read it; the manga does add more to the lore of the show, so that's always something great. Hopefully, you could end up liking the manga adaption more than I ever could.

The anime was great. But unfortunately can't say the same for manga.

It seems like the author is pointless fights for character development. I cannot understand the need for action in this manga. Once things start to become peaceful, he will introduce some random dragon and declare him as the enemy. So, thourh go and fight.

Personally, I hate Lucoa-san character the most. just because she belongs to the spectator fraction, she does not help her friends in need. She just ghosts them and will return and pretend nothing happened.

I think the author loves couples so every character in this manga likes someone else, even the kids.