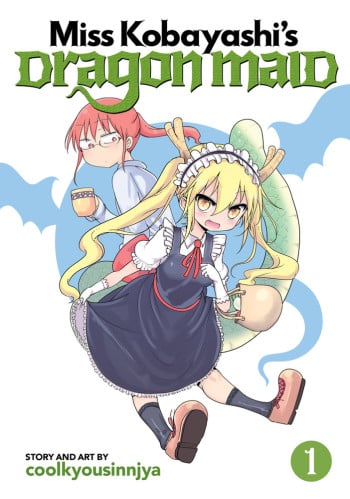 A dragon's hormones are not a trifling thing. Siegfried rolled a 20 for a chance to defeat the dragon (who was hunting for a mate) and accidentally hit the dragon with {Charm}, next thing you know they are married.

Both of these are about a human who lives together with a dragon-girl. In both cases the dragon-girl functions as a maid/housewife.

Adventurers seek to take the demon queen’s head, but a young female mage wishes to take her hand.

Both series involve a busty humanoid dragon woman and a  smaller chested human woman, that have a one sided love dynamic.

With both series there is a more optimistic and affectionate being.

While on the other half, we have a participant that try's too avoid the others romantic advances, but slowly starts to acknowledge and tolerate the other.

So if you like that type of dynamic in a lesbian romance, you might be pleased with either of these.

When Yurine summoned a devil from hell, she didn't really know what to expect. And she definitely wasn't expecting that devil, Jashin-chan, to get stuck on earth. Now the two must live together as reluctant roommates. And if things couldn't get any more awkward between these two, it looks like the only way Jashin-chan can return to hell is if she kills the person who brought her...

High school student Kazamachi Kunpei suddenly receives a call for help from Dragon Girl Aoinoun Dragoline, claiming that "her children had been kidnapped". Somehow, he managed to capture the fleeing culprit. However, what he retrieved was not the children but instead two huge eggs. Upon touching them, the eggs suddenly began to hatch...!

Hataraku Maou-sama no Meshi! The Devil is a Part-Timer! (Light Novel)

One day, gates to the other worlds began opening up all over the Earth. Many demihumans and monster came over from their own worlds, but many could not find residence due to their special characteristics. But, in a corner of Tokyo, there exists a real estate agent who specializes in finding housing for the otherworldly beings. The real estate agency “Ebisuya”. The boss, Gentarou was born in one of the other realms and was able to find the perfect residence for any demihuman with his rich experience. Be it a mermaid or an undead, just leave finding a house in Tokyo to “Ebisuya”!!

Year 20xx. In various parts of the world, there are gates that connect to another world. There are tens of thousands of demi-humans and monsters living in Tokyo alone and various services have been established to accommodate the residents from the other world. One such place is the real estate agency called Ebisu-ya.