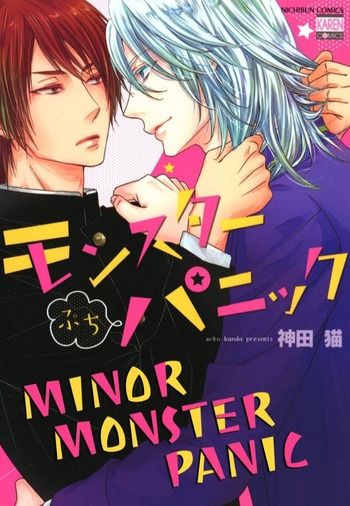 Debochi Amon (14) was always a passionate boy and had a tendency to literally steam up. Amon was living a normal life; going to school, hanging with friends and thinking about his crush on his classmate, Shinomoto Sako. One day, a third eye opens on his forehead after one of his usual “steaming” incidents and a talking owl creature who calls himself Goomin appears. Both characters are confused at the situation at hand and Goomin finally is able to explain the situation to Amon. Amon now possesses Pyrokinesis and his power of his fire increases when his passion grows. His emotion of wanting to protect something, like his crush Shinomoto, triggers the transformation into a demonic figure and his flame is powered through greed. Now, Amon must learn to control and use his powers to protect the human world from Angels!

When the Heavens Smile

Takagi, rather a cute and innocent guy, is best friends and class mates with Kumoi, the tall, intellectual guy. One day, Takagi sees a pencil sketch of a person in between Kumoi’s notebook pages, stunned to find a sketch of a man, resembles his older brother. So he asks, “Is that a picture of my brother…he passed away 6 years ago…?” Kumoi responds, “no, no… that’s nobody. It’s just a doodle of a random guy.” Takagi tells himself that Kumoi couldn’t have possibly known his brother and that this was just a silly fluke and the drawing was nothing but a random drawing… but he can’t stop thinking there is something more to the sketch…

On the day of the school entrance ceremony, our protagonist gets carried off to the sick bay. In his feverish daze, he did not see the face of his benefactor. However, he is determined to find him to convey his thanks.

The happiness of being together and the pain of being apart… He’s the one who taught me everything… Jiro Kusunoki had always admired Yoshiyuki Kurihara from afar, drawn in by his slender frame and his big, beautiful eyes. Jiro joins the track and field team in order to get closer to his crush, but finds it difficult to keep up, as Kurihara always runs alone to isolate himself from others. Jiro perseveres, however, and the distance between them slowly starts to fade away…

On a class trip to a museum, Kasama takes notice of his classmate Takagi, who he knows doesn’t talk to other people much. But as the latter enters a curiously shining door and realizes Takagi can see "it" as well, even his interest in the classmate is woken.

After the Global Evolution, I Stand at the Top of the Food Chain (Novel)

In 2121, a terrible pollution disease swept through the world. “We call it distortion, but perhaps, the history records of later generations will call it an evolution.” The evolution world was the epitome of the prisoner’s dilemma. Today, that person’s head split into two. Tomorrow, that flower would grow fangs. The day after that, that fish would climb ashore with its legs… Lu Yan: And I am merely a mediocre doctor who treats the pollution disease.

Welcome to Yamato Yamada’s world. He used to think his biggest problem was trying to be a manga artist in a family of die-hard martial artists. But now that his kamiwaza powers are manifesting, he may be too busy fighting for his life to ever get a chance to finish his manga!