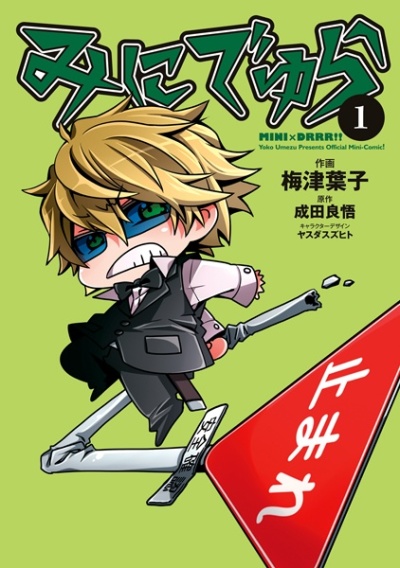 Minidura is a wonderful and cute manga with the characters as chibi's, since that's cute already. The manga is based around other adventures around the characters and doesn't base around much of the Durarara!! series itself. There is a chapter where it does base off of the second season of Durarara!! as a re-creation of the scene, however it doesn't imply anything much new; more like added stuff. Minidura includes season one and two characters as the more you read.

What I like about this manga is that it includes plots that we may never see and extras between the characters. Of course, that's the point of this manga, however it includes more than that.

Chapter 15 of Minidura revolves around Shizuo and Kasuka; Kasuka making a movie based off of his brother and intrepretated him. Not only that, we get to read something more onto how Shizuo deals with Kasuka's fans confusing Shizuo as Kasuka based off of the posters lying around.

Would I recommend reading this? Yes, of course. I recommend watching both seasons of Durarara!! in order to fulfill understanding some of the context while reading this; since it does include season two characters into this. Overall, I also recommend focusing on the relationships between the characters in order to understand the manga plots. It's a cute manga to read, honestly. Give it a go. Includes more journeys throughout most of the characters.