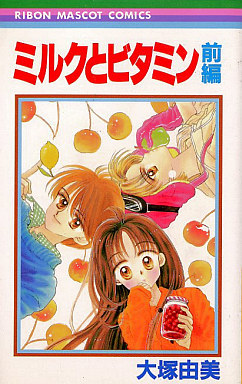 Ryou has the biggest breasts of any shoujo manga heroine to date! But life isn't any piece of (cheese) cake, because she's constantly being assaulted by perverts who want to cop a feel. The first man who doesn't obsess over her assets turns out to be the first man she ever wants to have obsess over her, though there's something strange about him... One time she's with him, he's a sweet masochist, the next time he's a bold sadist. Which does Ryou like better? The S or the M? She'll have to make a choice, because it turns out that she CAN'T have both. Find out the surprising reason why one face has two personalities!

Ever since she was a child, Chika has always dreamed of becoming a mangaka. But in her family, everyone is expected to become a teacher when they grow up. Then one day, she reunites with her childhood friend, Ryou, who also happens to be a mangaka, and is given the opportunity to work part-time with him as his assistant. Has her chance of chasing her dreams finally arrived?

For Anri, age 17, there can be only one--the popular singer SHIN. She'd risk her life to be transformed into a woman by him, and she'd sooner die than knowingly give her virginity to anyone else. After executing a few bold, attention-getting maneuvers, Anri gets what she wants, and then runs off before the man wakes up again. ...BUT was the man really SHIN? Anri discovers that there are fake SHINs who try to get women like that, and one incriminating piece of evidence suggests that the man Anri gave her virginity to was not SHIN. Revenge is now a matter of pride, and she's going to make this man pay! But does Anri really have any idea who she's waging war against?

Miori is always fighting with her boyfriend, a middle-school teacher, about her job as a hostess. After one such argument Miori goes out and ties one on and afterwards meets a young man who lends an ear and a shoulder... But then later on, she discovers something quite unexpected...

Mimoza's grandfather was worried about her until the time of his death. Before he dies he tells her that since she was too vulnerable and easily lied to by everyone to never trust people. He also leaves behind Kyle, a robot, to protect her from others. Thanks to Kyle, Mimoza no longer feels alone. But will she ever discover the secret this robot hides?

Suzune never got along with her cousin Yuuma when they were kids. Now that she's in high school, though, he suddenly shows up again after years of separation, and he's like a completely different person -- he's become cool and good-looking! Yuuma says that his grandmother told him, "Protect Suzune," and so now he wants to live with her...!?

I Hate You More Than Anyone

Kazuha Akiyoshi is the eldest of six children. Highly responsible and irresistibly cute, she is also something of a tomboy who never allows her softer side to show through –– until she meets Mizushima, the first guy to treat her like a girl. Kazuha has her first real crush; will it be reciprocated? Then there's Sugimoto, an older guy who wants to be an important part of her life — but he's the one who Kazuha hates more than anyone!

Adopted by middle classed parents, Mugiko has always dreamed to be an heiress. Who knew that one day this dream would come true. Mugiko's biological grandfather is the head of a prestigous family and after many years of searching, he finally finds his long lost granddaughter. As she starts her life as an heiress, everyday is filled with excitement, however, everything seems a bit different from what she had imagined, especially when her grandfather plans her engagement with Yoshiki, his previous heir, a cool boy who doesn't aknowledge her as the true heiress.

Rika is pretty, intelligent, and attracts the attention of all students. As her house was collapsed, she came to live with Mitsuru's family. Mitsuru, who is a babe in the woods, tries to approach Rika repeatedly, but she regards him as a fool. Love is unpredictable, however. Rika finds it difficult to keep her virtue.

Higuchi Asuka's mother dies shortly after she tells her teenage daughter who her father is. Only knowing the family name “Sudou”, Asuka goes in search to find her absent father.On her journey, she finds a guy being rather rough with a younger girl. Unable to resist, Asuka steps in by battering the guy with her motorcycle. When she discovers it was a big misunderstanding (Manato was just trying to get his sister Kazusa to go home), she drives them back to their house. Once there, Asuka finds out that Manato and Kazusa are the Sudou family she's been looking for, but the father isn't there, not to mention their mother also being dead since long ago. With no other leads, Asuka decides to move in as Neesan (the big sister) until their father shows up. Things get tricky when love builds within the complex family relationship...