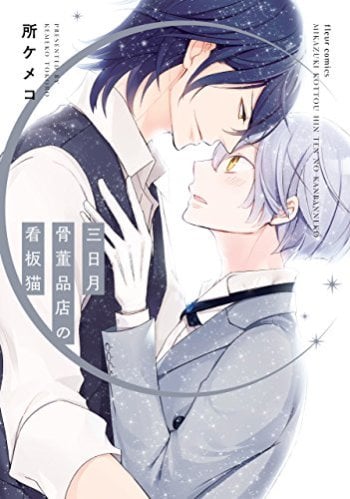 If you're looking for manga similar to Mikazuki Kottouhinten no Kaban Neko, you might like these titles.

Is it all Inevitable?

Social norms, what his parents think... All those expectations he didn't care for as a kid now bother him to no end... Shinichi spends most of his days dealing with his mom trying to put him in an arranged marriage, and when he goes to an all guys' bar for the first time in a while, he bumps into his subordinate, Ataru. In comparison to Ataru, who's happy because he believes it's destiny that they learn about each other in this way, what does Shinichi do about his conflicted emotions...?

Company employee Eiji Konishi missed a large contract because he was helping injured cats. He is given a last chance by scion Hikaru Sakuraba. Now his life is filled with... sexual harassment??

New recruit Yuya has started dating the office hottie - his boss, Akira! He still can't believe a man so amazing is his boyfriend! Just seeing that sparkling smile pointing his way makes him too nervous to kiss Akira, so Akira comes up with a plan... to blindfold Yuya and tie him up! This is an unabashedly naughty romantic comedy featuring a boss with a sadistic side that loves the sight of tears on his cute, clueless boyfriend.

At a retirement party for one of his college professors, Sakami is head-hunted by a famous and charismatic company president. With his uninhibited lifestyle, the tyrant of a president crushes Sakami's aspirations. Victimized by the man himself and his overly free behavior, the secretary experiences the beginning of his love life!

A square but proficient employee is relegated to a flippant supervisor who joined the company in the same year. As the milling report has it, the supervisor has risen in rank using his body...

President Momoi is only interested in his leadership role ‘cause it’ll help him find a young, sexy boyfriend! But why is he constantly gazing at his colleague, the old and very married Director Watanabe? And what exactly does his massive company manufacture, anyway?! President Momoi-kun splices together the silly and the seductive in a masterful mix of crushes, courtship…and naughty “candid” photos! Will the President avoid public scandal while convincing his beloved that their private partying is worth all the trouble?

Saitou Hikaru wants to travel overseas more than anything, too bad he can't pass the exam that would qualify him for it. Then he trips over the handsome foreigner Leo in a park and takes him home. Leo acts like a young master, but Hikaru can't resist his sweetness. Did Hikaru let a wolf in his house? And who is Leo, really?

Maki, who works for a big company, has secret feelings for one of his subordinates, his boss’ son Sudou. He’s been assigned to watch over Sudou, so as to prevent him from making mistakes that would compromise his brilliant future. One night, however, Sudou catches sight of Maki in Tokyo’s gay district, kissing a man. Driven by his curiosity, Sudou promises to keep quiet about it… Only if Maki sleeps with him. When the two men start a physical relationship, Maki still hopes that Sudou’s curiosity towards him will continue. But he’ll quickly realize that it’s not the only obstacle he’ll have to overcome...

Up and coming interior planner, Takamori Fumito, is having an affair with Eto Shunsuke, the president of the company where he is working, despite the fact that Eto is married to an owner of a famous fashion apparel. From the very beginning, they made it quite clear that their relationship is strictly physical. However, Takamori realizes his heart is now in danger— a story about adults struggling with love and sex.