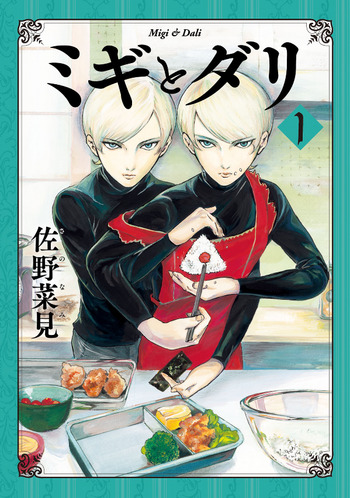 At first sight, Jinbe is the story of a young 17 years old girl, Miku Takanashi, who lives alone with her stepfather Jinbe. Jinbe has been living with Miku since his marriage four years ago, and considers Miku a God's sent gift from his deceased wife. While the man does his best as an overprotective and jealous father, Miku holds feelings for Jinbe which are much stronger than the ones an adopted daughter is supposed to have. The main core of the story is how they deal with the strong, tender and unrequited feelings of the young Miku which test their stepfather and stepdaughter bonds, without jeopardizing any of the happiness that she feels by being close to him as a proper daughter.

"Make the seller happy!" "Make the buyer happy!" "And most importantly, make society happy!" Those are the legendary "win-win-win situation," a traditional business principle originated from merchants of Oumi. Many companies in Japan had been adopting this principle for centuries, but with the endless Heisei recession, such honest and warrior-like business is harder to find. "The Merchant King," tells an adventure of Oumi Shigemori, the mysterious, passionate merchant who's peddling around the country; Recovering the crisis, moving the clogged business--here comes the hard-boiled Heisei commerces saga that would leave your mind blown!

Kanae's husband disappeared without a trace while on a union trip. Though usually headstrong and independent, the woman becomes plagued with worry over what happened to him, and is unable to move on with her life. Thus, Kanae decides to hire a private investigator, and keeps running the public bathhouse to the best of her abilities, but the detective who shows up is disheveled and eccentric. As he tries to figure out the truth about her husband, Kanae must deal with the stress from a work-intensive job, meddlesome neighbors, and recurring nightmares in which she is drowning.

Follows the trials and tribulations of Agawa Kayo, a volunteer probation officer.

Following the death of his daughter, Assistant Inspector Yamada has lost hope in everything, and jobs like closing under-aged prostitution rings don't exactly help matters. But there he meets a girl who looks alarmingly like his late daughter. Her name is Umino Shiori, a runaway girl who's desperate enough to sell herself to escape her house but won't tell anyone why.

They say that the prime of one's career happens in their mid-thirties. During that time, women plan many things and tell themselves, "I won't let this year go by without doing anything!" And then, a 34 year-old's life begins. Hearing a new vacuum cleaner hum in the night shifts her moods as the Galactic Railroad runs in her mind...Shall we take a look at an unemployed's slow, laid-back daily life?

The manga follows a maker of individually crafted shoes after he returns home from a trip to Florence, Italy. One day, a surprise visitor comes to his studio.