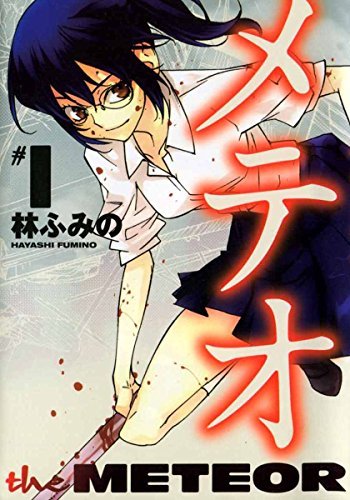 Summary: Kawana Tomoko, a 15 year school girl, doesn’t care about much. Everything from her social life to school life is a blur. One summer day, while waiting at a bus stop, Tomoko finds herself waiting with her classmates, Sasajima Miyuki, Yatomi and Sannou. There are nasty rumors flying around about Tomoko and how she had relations with Yamashita, a teacher at their school. As the group boards the bus and the awkwardness reaches its max, a meteor comes out of nowhere and hits the bus sending everything into a frenzy.

Plot: When I started finished reading this manga I asked myself "what did I just read?” This manga was bad. It certainly not the worst I've read, but it was bad. The manga tried to be a psychological survival horror and it turned out to be a bunch of random events that did nothing for the story. The manga didn't know quite what it was aiming to be. What I got was: a bunch of naive bruiting teenagers that served no psychological purpose besides driving me insane. It was incredibly boring and is almost laughable. Before I forget, the ending is just horrible. There is a huge difference between a subtle ending, and I ending that just cuts off the story. However, even though the plot is all over the place I do run a considerable risk of spoilers. So I'm going to stop there.

Art: In survival horror, psychological, and Seinen the drawing style has to greatly contribute to the story. This is just a run-of-the-mill boring drawing style.

Characters: The aforementioned teenagers are not only bruiting and naive, but they are so annoying! Kawana was a bland main character and she provided no psychological aspects. Sasajima probably should have been the main character, but she was so goddamn annoying!  Her character consisted of a selfish teenage girl who whines like she's a fashion model who didn't get her bowl of all red M&Ms. She also had an annoying obsessive crush on the jerk sensei Yamashita. Despite Sasajima contributed to the psychological tag more than Kawana; I perfer Kawana to this windbag. Yatomi and Sannou annoyed me an impressive amount for side characters. These four character's backstories were not explored. The only characters I liked were Ayachi, Yuuto, and Nao. I cannot elaborate on those three because I run a high risk of spoilers. And finally, Yamashita; he could have been a great villain or anti-hero or whatever, but they decide to kill him off by the end of the last volume. No.

Overall: Various times while reading the manga I wanted to punch my monitor, throw my keyboard against the wall, and basically chop my computer into bits and pieces. I will repeat again: this manga is boring garbage. Nuff said.

~this manga.... tbh i dislike it. its a good survival and stuff, but the MC is a total bitch. in the beginning both of them were bitches. then in the end both of them are still bitches. plus this manga has no logical sense what so ever. it makes no fucking sense. there stories and back stories dont give much emotion. the diologe feels to forced and cliche. story isnt realistic and is over dramatic. like damn if there was a meteor in the village it would at least wipe it out, but noooo only earthquakes and some destruction of buildings. im salty about the MC shes cold and fucking rude while being nice??? like "We gotta help this person, everyone deserves to live" ~5 chs after~ *kills people for the sake of survival*/ * a person complaint about food* "if you dont want to fucking eat it then throw it away bitch" *waste the rations used for survival to throw it in their face*/ *proceeds to blame someone and criticize them for killing someone and didnt think to bat Bout the people she killed considering she killed way more people than he did* Various times while reading the manga I wanted to punch my monitor, throw my keyboard against the wall, and basically chop my computer into bits and pieces. this manga is boring garbage.

THE ENDING WAS UNSATISFYING AS HELLLLLLLLLLLL
THIS MANGA TRIGGERS ME
2/10 :)