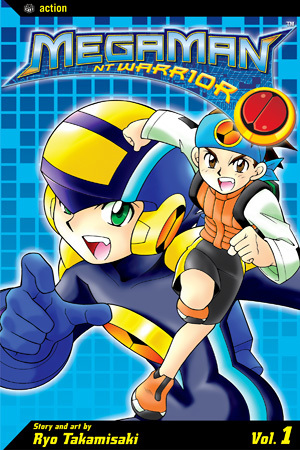 I read that manga in 3 days! That was really great shounen.

Story was similar to this from the game, so it was really good, but I'll say that it had too much fighting, and there wasn't some interesting events which appeared in game, for example the fact that Rock and Netto are in some way twins.

I really loved the art. Style of Takamisaki Ryo is great, it reminds me in some way Dragon Ball. Oh, I'll say that the style was much more better than anime's.

Also some little bloody scenes were really suprising, when I was watching anime I thought about more brutal fights, and... BOOM! Manga satisfied my desires. :) (but as I love bloody mangas, I should please for more, lol)

Takamisaki caused the story became more dynamical and emotional anyway, for example he made Rockman extreme cute in normal situations, but during fights he looked really determined and dangerous...Especially in later volumes.

Talking about the characters... Their personality differs from anime and game, but that's not minus. It just makes the story different from other "versions".

Overall manga is really great, and I reccomend it for you, escpecially if you like/love Rockman series, or just like shounen.

Premise: Everything is connected by the cybernet, so a virus outbreak can end thousands of lives. Terrorists can now incite panic with only an internet connection, and because kids are the best at operating net navi programs, a few get recruited to keep the peace.

Art: Very crisp with many sharp lines and solid angles. Very appropriate for the digital environment.

Battles: There’s actually a lot at stake in some battles, and things often take a turn for the worse! I was surprised, since threats aren’t usually serious in shounen series. I expected good to always triumph and safety nets to be around to protect everyone, but that’s not the case.

Abilities: The power levels of some of these navis are insane! Just when I thought one had maxed out, a new ability or technique appeared. It’s rather surprising that the world survived it!

Factions: The continued introduction of new countries and new navis made things uncertain and kept me coming back for more.

Overall: Megaman NT Warrior is a solid shounen series- great battles, memorable characters, impressive abilities, and a boy who misses a lot of school… this series has it all!