Me and the Impish Devil - Recommendations 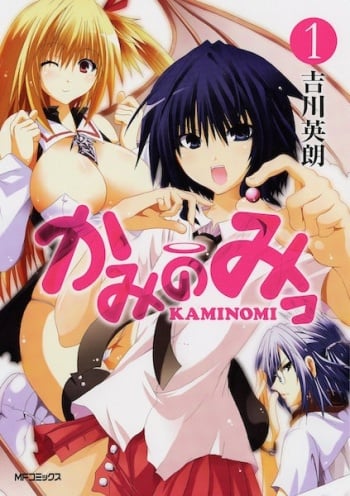 If you're looking for manga similar to Me and the Impish Devil, you might like these titles.

Three friends, Kotori, Yuuto, and Rin are trapped in school when the principle halfheartedly summons a horde of demons. The demons make a pact with each student in exchange for possessing them. Most of the students wished to be be good looking or to have longer legs, but Yuuto manages to stave off the possessed student body while Rin overpowers the weak demon possessing her. Yuuto makes a pact with a demon to return the school to normal, but what will happen to the school now that each student is being possessed by a demon?

16 years ago, Japan was swept by a series of natural disasters that destroyed all modern society. Momoka lives with her grandmother who makes a living selling pieces of the old technology. It's Momoka's job to dig up the "treasure" from the junk yard. But, things get harder since some punk mutant(?) oni claim the junk yard as their own. The battle is on as Momoka battles the oni for a piece of the action with her friends Monkey, Dog, and pet bird, Kiji.

In a world where magic is commonplace, Eru has just enrolled into magic school but he's incredibly concerned about having smaller horns than his classmates. But when he meets Rihito, the high-scoring top student of their year, its a sign that things are about to change!

Wouldn’t you like a little magic in your life? Yamada, an average college student, definitely doesn’t. And no wonder. The touch of magic that entered his life is Mao, the Princess of Darkness, and her bevy of enchanted friends, Dorako and Tatami.  After a demon summoning mixup, Yamada finds his everyday life hindered by Mao’s crazy antics. Throw in a horror mangaka and her harried editor, and Yamada’s world is brimming with supernatural hijinx.

In a land far away, the evil demon lord ruled with absolute power and cruelty. But a group of heroes combined their strengths and conquered obstacles to finally reach the demon lord in a final fight. When the sorcerer cast the imprisonment spell that was supposed to trap the demon lord, it also dragged all the heroes into a different dimension. The demon lord, who looks and acts like a teenage girl, has lost her legendary powers and is forced to rely on the heroes to find a way to escape the prison. The sorcerer, who is leading the search on how to break out of the spell, can’t help but to tease the now powerless, bratty and emotional demon lord that once was a threat to the entire world.

B.Q. Side A The Mouse Book

B.Q. Side B The Fly Book

Amano Chiyako is an oni who tore off her horn and chose to live in the human world. One day, two little gods, Kou and Haku, appeared in her apartment and started to live with her. Having no horn, they didn't realize Chiyako is an oni, the natural enemy of gods and treated her as a normal human, causing her a lot of trouble through their divine purifying powers and love towards sacred items.

Inaba Kyoko has grown up and followed the path to becoming a teacher! Now, she's going to teach 5th grade alongside the teacher who inspired her, Meisuke Nueno, called "Nube." Nube was an exorcist teacher who, with the help of his 'demon hand,' guided his students safely through many supernatural dangers. Together, they will now get to know their new class, and help them safely through difficulties both supernatural and mundane!