Me and the Devil Blues 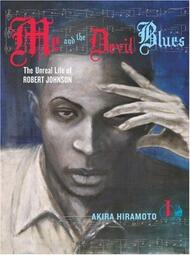 Down in the Mississippi delta, RJ has a stable life and loving wife, but what he really wants is to play the blues better than anyone around - a dream he'd be willing to give up just about anything to attain. One night at the juke he hears a rumor that if a man stands at the crossroads at midnight and plays a song, the devil will appear and transform him into an expert bluesman in exchange for his soul. Later, in a drunken stupor, RJ accidentally does just that, dooming his happy life. With nothing to return to, he sets off on the road where he'll face gangsters, a small prohibition town determined to lynch him, and the devil himself.

916 users are tracking this. Log in to see stats.

The mangaka/author is definitely knowledgeable when it comes to Robert Johnson and the myths surrounding him. But this is by no means a manga biography of Johnson. Given that there is very little verifiable information on the bluesman, the book takes a lot of liberties and, in my opinion, gets a bit far-fetched at times. The book's depictions of 30's blues clubs and such seem relatively authentic, and compared to a lot of other manga, the book has a very 'western' feel. The artwork is one of the book's strong points, with a lot of attention of detail. Most is gritty-looking and fleshed outwith lots of cross-hatching and doesn't seem at all cartoony.

Story: Legend has it that if you stand at a crossroad at midnight and play your guitar, a man will come up to you and ask for it. If you give it to him, he'll tweak it and you'll play like no other. To be able to play music beyond measure, all it would take is your soul. The same legend goes for Robert Johnson, one of the most legendary bluesman in history. King of the Delta Blues, he is a bonafide legend. Me and the Devil Blues is all about him, from the start of his time with Virginia and the birth of his blues. It's like no other manga I've read and not just because it's one of the few based on the blues. It mixes the supernatural and the factual, 1900s and the blues and while I doubt it's halfway to non-fiction (Not including any supernatural elements), it still paints a magnificent tale. This one's a slow burner, it takes it's time to get things rolling and the events go about their own pace. Hardly ever rushes but don't be fooled by the slow start! It takes a while to shift gears and alternates between long bouts of slow progression and some fast-paced action and suspense. Still takes it's time, but it's pretty worthwhile. I really can't talk much about the plot as the entire first volume's about the Crossroad Blues; which leads to another point, a nice tidbit that was added. Crossroad Blues is one of his songs, and pretty much every chapter title is based on one of his songs. Just a really awesome nudge for those familiar with his works. Personally, I enjoy the blues and this manga felt fresh and new. You don't see many like this around. But... I guess I'll have to rain on my parade and warn you about the ending. This was cancelled and there ain't going to be any more volumes. It feels incomplete, like the storyweaver had more to tell. It could have certainly ended worse but no clear conclusion to a series that deserved one. Art: Outstanding, absolutely outstanding. The work is detailed, the scenery gorgeous and the characters come alive, they jump out of the page in a stark, realistic art style. It warps and twists as the work of a greater evil takes over, the evil of man, of the devil, the sharp change that still holds the artistic quality of the pages past. The art remains consistently amazing through and through. But the best part, is how it portrays the music. You can almost hear the blues play because it looks so good. It feels real, it feels natural and it feels like you're there, in that bar hearing Son House or Robert Johnson play. Characters: It's mainly about Robert Johnson and a Mister Clyde, they develop quite nicely and particularly liked Clyde. They're really quite something, and the characters that revolve around them are their own beasts and human all the same. White man and black, it portrays a nice racial difference between them and to the setting accordingly, where a black man can be lynched for the leanest of offenses and whites hold the most power. Authentic, I guess. Don't have much more to say about that but the fear is justified. Overall: It's slow, but it does the blues justice. It has the music, suspense, the legend of the crossroads, amazing artwork, a compelling tale that takes it's time and seriously, the blues. There's power in the pages and despite the cancellation, this is more than worth your time.