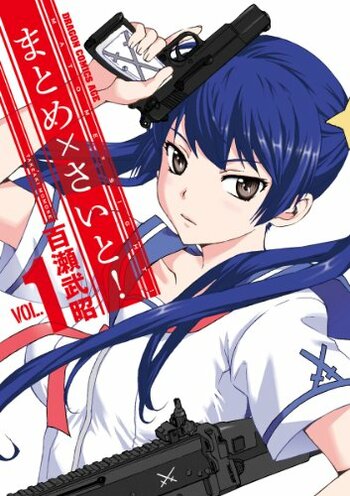 New dawn of historical gunfights! A Meiji Era like no one has ever seen before is here!

Eighth Research is a large biotech company based on advanced research and development of DNA manipulation. Naoya Graphico is on the security team for the company run by his uncle. Naoya has been acknowledged for his high combat skills and is sent on top secret missions regarding Eighth Research interests. His most recent task has Naoya infiltrating a rival company where a mysterious girl named Celcia has been kidnapped. Naoya's passion for protecting the weak always helps him accomplish missions; he just needs to make sure his libido doesn't get in the way.

Gisuke Arikawa is a good-for-nothing high school boy whose future seems bleak - but that's about to change. He inherits an omamori charm, and with it comes its own pretty little Russian maid! The charm will be the guide that leads him to be the successor to Dragoon, a huge multi-mational corporation. This comglomerate could be his, but only if he can manage to procure 14 other charms similar to his own. The hunt is on, but this geeky high school loser will have to leave his lazy days behind and prepare for some serious searching!

The sole survivor and witness to the serial kidnapping case that drew national attention 10 years ago was Oyamada Yusuke. In the end, a total of 108 children vanished into thin air and the case remains unsolved. Since that incident, Yusuke has been able to see evil spirits and has been attempting to seclude himself from society. But one day, he meets Kanon, a member of the anti-doll organization. She explains that the spirits that he has been seeing are called dolls and are the manifestation of people’s incredibly strong emotions. Yusuke accidentally releases a doll named Makina that even the organization had to resort to simply imprisoning instead of destroying. However, Yusuke learns that Makina has a connection to the kidnapping case that he was involved in years ago!

Jizano Chiko, Master of Drunken Fist, fights against evil while looking for a toilet?!?

Hana, a high-schooler that is known as the cutest girl in school, gets pulled into a supernatural event while on a beach trip with her friends. This event, called a "Red Night Eve" involves a transformed extremely massive shark, which targets Hana while she's swimming! Luckily, she's rescued by the siblings Yayako and Yuuto Kagimori, students from her school who know all about these occurrences, and who even have a support program AI named Acacia in their tablet to help them. Not long after, Hana and the siblings are involved in another event, this time involving her precious class pet parakeet being transformed into something monstrous. With all these supernatural events, Hana's life is never going to be the same.