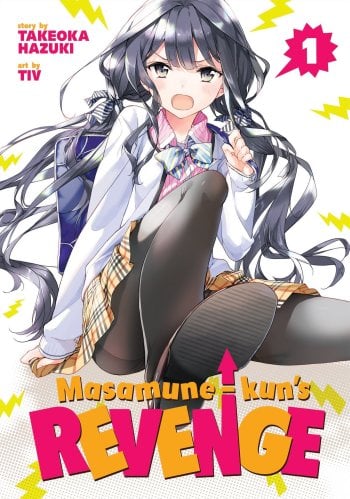 The manga is still ongoing, but I had to drop it after the plot-line started getting ridiculous after chapter 19.  The premise of the story caught my attention, but so far by inferring it seems like the male protagonist will not fullfil his revenge and the opposite might happen.  I may be wrong, but the worst part is the intrucduction of the new male character and the actions of the minor characters.  Actually, both main characters have crappy personalities.

Man.... It was nice, but nothing more than that. Sure, the art is fine. But honestly, it was disappointing. Would have been way better, if it just stuck to it's premise. But it turned all lovey-dovey and thus frustrating. Characters seem not fleshed out and stay twodimensional, forgetable. But still was a good read - though nothing new.

Wow! Just finished reading all 50 chapters over the weekend! Last time I read a manga (1 year ago) it took me 2 months to read 200 chapters. Also, I don't read manga a lot (definitely not as much as watching anime), so this review is from the point of view of someone who watches anime.

The only reason I read this manga is because I watched the anime adoption, which didn't have a real resolution/ending. I couldn't wait any longer, so I read the manga.

No spoilers! Yay! (Also I assume you read the synopsis)

Masamune-kun's Revenge has a story that contains many surprises along the way. You can probably guess what is going to happen in the end, but the journey getting there is amazingly upredictable.

I loved the story in the beginning, but it just gradually got worse towards the end. The first 30 or so chapters have a clear plot -- about Masamune getting his revenge. He encounters some obstacles and gets past them. Masamune gets closer to completing his quest as his relationship with Aki grows. However, after that, the plot starts to go all over the place, with the focus jumping from person to person. But there are still some good parts of the second half, like the increased amount of drama and the answering of all the questions accumilated in the first half.

The ending of the manga is kind of quick, leaving me feeling very unsatisfied. I was asking myself over and over "So what happens after that?"

The art is okay, not too special. The artists do a good job at conveying expressions of the characters. Nothing much to say.

Okay, I see 4 main characters in this manga. Futaba and Kojuurou, and a few other characters, have close to zero significance to the plot, they are there just for a little bit of comedy. There are a few characters introduced for their own stories, but afterwards they just disappear and we don't know what happened to them.

The 4 main characters, Masamune, Aki, Yoshino, and Fujinomiya (in order of importance) are the only characters with drama between them.

So far I have read the latest chapter (chapter 39) so this is just a quick review. I can tell you now that it appears to be your typical shoujo comedy where you know who is going to end up with who and how his "revenge" will work out or not. Though so far almost every girl has had or has feelings for the main character but what is interesting is the the little plot twists that come here and there escpecially the one involving the other "boy" from chapter 19 (don't want to give away spoliers). But It defintely shows some potential, hence why I continue to read it, though I have a feeling its almost completed.