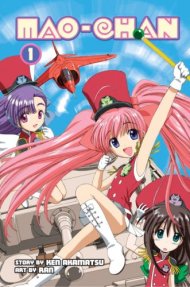 159 users are tracking this. Log in to see stats.

Warning, this review contains no major spoilers, but does explain the basic premise of the series. If you are yet to read this manga, the following review may affect your reading experience. Mao-chan is a manga adaptation of the anime by the same name. Ken Akamatsu (Love Hina, Negima!) rewrote the script for this medium and put his dubbed prodigé RAN (Negima!? Neo, Dragonar Academy) to draw the illustrations. The result of their collaboration is a 4 volume epos about kawaii lolis saving the Japan from the mean old alien invaders. Our story plays in an alternate reality Japan where aliens, piloting a shameless parody of battleship Yamato, try to steal the country’s national treasures for their nefarious purposes. Despite Japan’s history of combating threats ranging from giant nuclear lizards, walking fish powered by intestinal gas and robots of all shapes and sizes, the military was powerless to stop their formidable foe because they were too darn cute. That’s right, Japan’s finest and brightest couldn’t defeat their adversaries because harming them would cause uproar from the moe-induced civilians!  To stop the interplanetary crooks from whisking their entire heritage, the government was left with only one option, employing three grade school girls to defend the country. With their combined powers, the three heroines battle against the oversized plush toy invaders with cuteness, rainbows and happy happy joy joy.  The three girls are all a member of a select force of Ground-, Air- and Naval defense. Mao Onigawara is the member of the Ground division. She is a cheerful child who loves her country but is also a giant klutz. Misora Tsukishima is the rational and responsible one and is a member of the Air defense, she often worries too much and tries to shoulder everything herself. Lastly there’s Silvia Maruyama of the Naval force, she is the laid-back member who often gets the girls into mischief.  The three girls all have grandfathers who're the head of their division and are also childhood friends. During the day the girls try to have a normal school life which gets constantly interrupted by alien attacks. Using their mystical shamrock amulets they transform into a marching band uniforms and then proceed to fight the aliens. Sometimes they’ll call upon the power of their sentient combat vehicles (tank, fighter jet and/or submarine), use their powerful triangle beam to neutralize the foe or sometimes they simply whack their target in the head. Rest assured Japan, you are safe between 8 A.M. and 8 P.M. because afterwards it’s their bedtime! The premise of each story plays out fairly episodic: the girls are doing stuff somewhere, something happens, a foe appears, a complication arises and the day is saved. This formula is fun for about two or three chapters and gets real old, real fast. Beyond the traits I described above, none of the characters get any growth and are basically as thin as the pages they are printed upon. The only time something new does happen is at the very end of the story.  Undoubtedly this will prevent you from marathon reading the series due to its highly repetitive nature. The only saving grace that Mao-chan has is its art. RAN does an uncanny impression of Akamatsu’s style, his design is softer and more stylized but pleases the eye nonetheless.  The backgrounds are detailed and characters look superb. The three heroines are kawaii and will appeal to moe fans. In contradiction to e.g. Negima, this story features little fanservice, in fact I can count all of the (subtle) panty shots across the four volumes on one hand. The only flaw are the enemies, while reading I often found them clashing due to their simplistic designs in contrast with the detailed artwork. The two English compilations (2 volumes per book) released by now out of service Del Rey feature bonus manga, sketches, bunch of 4-koma panels and translation notes explaining cultural terms used in the story.  There are also drawings of all the aliens that appear in the chapters recapping their strengths and weaknesses. These extra features are a nice fluff, but (except the TL notes) they don’t add anything but extra thickness to the volume. At the end of the day I really can’t say that I was the right person enjoy Mao-chan. Despite its cutesy artwork the story is repetitively dull which will only appeal to the hardest of Akamatsu- and/or moe fans.  If you have a young girl in the family, this might serve as a great introduction to the world of manga. 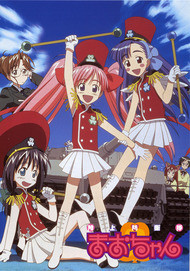