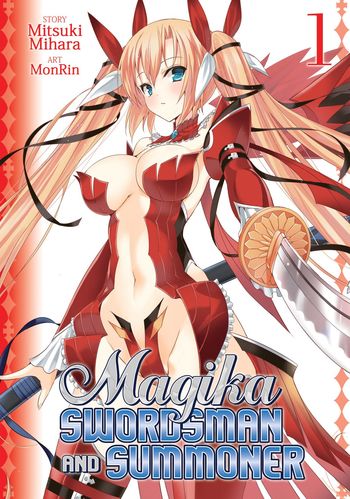 The "school sword action" story revolves around Magic Knights, modern magic-users who fight with weapons converted from their souls. Ikki Kurogane goes to a school for these Magic Knights, but he is the "Failed Knight" or "Worst One" who is failing because he has no magical skills. However, one day, he is challenged to a duel by Stella, a foreign princess and the "Number One" student. In this duel, "the loser must be obedient for life."

Joseph, the successor of the Great Demon Lord, became a teacher in the Wizarding Academy with the help of the demon princess Lilith who has the power of "love" that helps him to successfully ascend the throne, but the reason is to form a "sexual love bond" with some of his students!?

Negi Springfield is ten years old... and a powerful wizard! This boy wizard is the greatest prodigy ever to graduate from his magic school in England. After graduation, however, Negi’s given an unusual assignment: teach English at an all-girl school in Japan. Now Negi has to find a way to deal with his thirty-one totally gorgeous–and completely overaffectionate–students... without using magic!

In order to battle witches who threaten to destroy their world, the Anti-Magic Academy trains special soldiers to be Inquisitors–but not every student is successful, as is evidenced by the ragtag 35th Test Platoon. Takeru Kusanagi, a soldier who relies on his sword rather than guns or magic, is captain of the struggling platoon. When the elite shooter Ouka Ohtori is demoted into the 35th Test Platoon for excessive violence, they’re all in for a rocky mission…and an explosive future.

The Dawn of the Witch

Saybil is a magic student with no memories of his life before he met a mysterious blond woman in an alley. Now he travels with his teacher, Los—another student, Hort, and the beastman Kudo for “special training”… but this field trip may not be as routine as it seems!

Arata Kasuga transfers to the Royal Biblia Academy to solve the mystery of the destruction that is ravaging the world and that–more importantly–has stolen his cousin Hijiri from him. It’s a tough road that lies ahead of Arata, but nothing’s impossible when you have seven beautiful girls–each a master of her own magical art–at your side!

Fifty years ago a witch died and left behind what was called the "Witch's Legacy". It is now the modern day where it is said that whoever collects all 99 pieces of the Witch's Legacy or "Witchcraft" will be granted one wish.