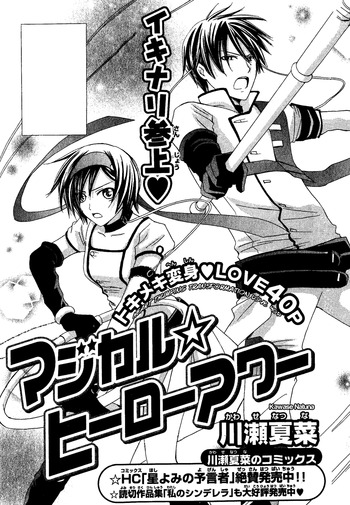 The journey to find all eight sacred gems continues, as Sousuke and Shino travel in search of the remaining gem holders. From the shadows the Imperial Church continues to scheme, and a mysterious woman seeks to fulfill a sinister plot with the gem holders at its heart. As the origin of the gems comes to light, so does the truth behind Sousuke’s doppelganger, Ao, as he resurfaces with his own goal— one involving Sousuke and his gem!

After nine year-old Melmo loses her mother in a car accident, she is left to care for her two younger brothers, a task far beyond her age or means. However, in the midst of her grieving, Melmo is visited by the ghost of her deceased mother who gives her a bottle of miraculous candy, capable of transforming her into either an adult or an infant. A combination of the two can reduce her to a fetus and then change her into any animal she imagines. Drawing on a seemingly inexhaustable supply, Melmo uses her candies to solve the various problems thrown her way, aided by her younger brother Toto and her cantankerous mentor, Dr Nosehairs.

Sawako and the gang have decided to re-enact classic fairy tales complete with their own personal touch. With Kurumi taking centre stage as the heroine, it’s left to Sawako to take on the villain’s role. But with Buddhist chanting substituting for magic and wrecking balls instead of poisoned apples, will Kurumi be able to snag her beloved Prince Kazehaya once and for all?

In ancient medieval Japan, the people are oppressed by a brutal emperor and his four children, with no hope for the future… until the prophet Nagi proclaimed that a child born on a day would be their savior. Twins were born that day, a boy, Tatara, raised from birth to be Japan’s savior, and a girl, Sarasa. This is her story: a story of great personal loss, tragic romance, and a resilient unbreakable will.