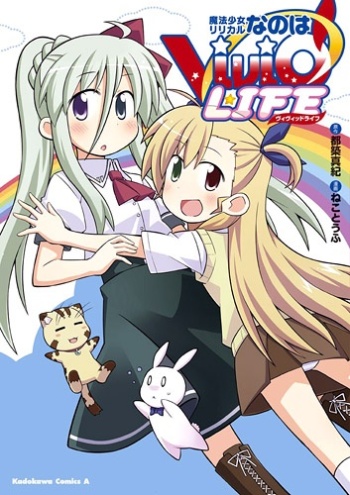 If you're looking for anime similar to Magical Girl Lyrical Nanoha Vivid LIFE, you might like these titles.

Komugi Yoshida is an energetic but clumsy middle-school student who performs as an idol. Although her popularity is lacking, Komugi lives a dual life between her two worlds, until a mysterious creature named Usa-P appears before Komugi and grants her the powers of a Legendary Girl. Now Komugi has reluctantly become Magical Nurse, and must add a third life of fighting monsters to her already crowded lifestyle.

With no other idol work available, Komugi finds herself working in a cosplay cafe with many other actresses represented by her management agency. Unfortunately, this also means Akiba is under the same roof, and the two spend their time bickering about breast size – much to the male patrons' delight! Meanwhile, Kyousuke is in the vicinity to showcase his new series and Komugi is determined to slip out and catch a glimpse of the heartthrob, causing no end of trouble for her manager. Will she finally be able to confess her true feelings to Kyousuke, or is she destined to carry a serving tray for the rest of her life?

As more and more Servants join Chaldea, maintaining resources for so many is becoming a problem. And so, a cruel order has been given...