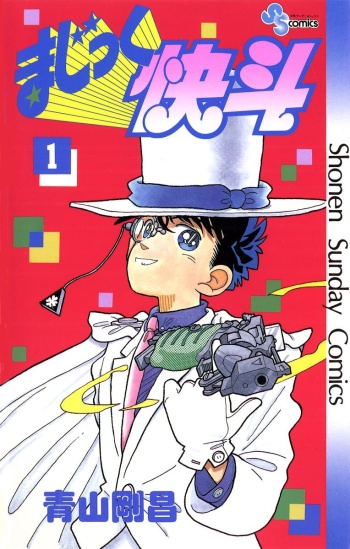 I bought the Manga because I've always liked Kaito KID in the Detective Conan Anime and Manga. If you watch some episodes with him, you'll notice he has a strange personality. Not in a bad way, though ^^ He always steals and behaves like a macho, but then again he's a gentlemen and even helps Shinichi out one time.

However, I asked myself why this it and looked it up, so I found this Manga. You get to know about his past and his reasons, which are on the one side finding his father's killers but on the other side having fun. And that's exactly the case: Kaito Kuroba is very goofy and has always fun with everything - if he wants to or not. Even though there is much comedy in it, there's still a serious plot behind it. Kaito has a goal, what makes the Manga even more interesting.

Gosho Aoyama is the Mangaka of Magic Kaitou. Because it's him, everything remains logical. If you had enough courage and strenght, you could even make his plans come true, I think. Because everything is realistic and you don't get to know all the plan right at the beginning but at the end, it doesn't become boring to read.

Though the story and of course the characters are great, Gosho Aoyama's way of drawing is not a good thing for everyone. I like it, though, but there are enough people I've heard that they don't like it. But I have to say that it is his own way of drawing and it fits very well to the comedy and the seriousness at the same time.

You couldn't buy the Manga for a long time (or it would have cost you a lot Q_Q but it was worth buying it back then ^^), but now there is a new edition called "Kaito KID Treasured Edition". So it's easy to get the Manga in the bookshop now. Don't hesitate and go look for it! ;D