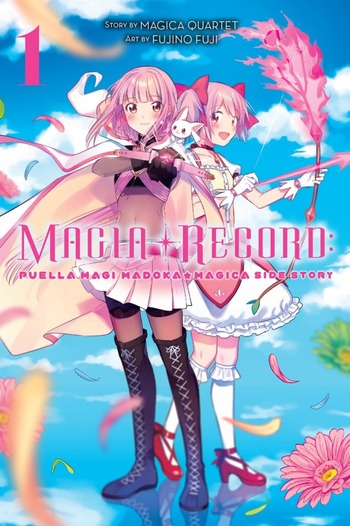 If you're looking for anime similar to Magia Record: Puella Magi Madoka Magica Side Story, you might like these titles.

One day, a girl named Homura arrives at Mitakihara Middle School as a transfer student, mysteriously warning her classmate Madoka to stay just the way she is. But when Madoka and her best friend Miki are pulled into a twisted illusion world and meet a magical creature named Kyubey, the pair discovers that magical girls are real, and what's more, they can choose to become one. All they must do is sign a contract with Kyubey and agree to fight witches that spread despair to the human world, and in return they will be granted a single wish. However, as Homura's omen suggests, there's far more to becoming a magical girl than Madoka and Miki realize...

Akari has always known two things: she’s a skilled fortune teller, and she has an uncanny knack for growing huge, healthy plants. But after experiencing a traumatic tragedy the girl soon discovers the true horror of the world: there exist evil spirits known as Daemonia that infect people’s hearts and grant their hosts wishes in exchange for a contract. After the wish is fulfilled, the human is turned into a murderous monster, and only Sephiro Fiore, a group of girls who wield the powers of the Elemental Tarot, can put a stop to them. As the bearer of the Sun card, Akari must join Sephiro Fiore and help take down those possessed by Daemonia, no matter the cost.

Six months after the Jewel Seeds incident, Nanoha is still using her magical powers to help the Time-Space Administration Bureau maintain dimensional stability. However, new adversaries involved with the dreaded "Book of Darkness" Lost Logia have appeared, wielding weapon systems that far outclass Nanoha's Raising Heart and Fate's Bardiche. Nanoha, Fate and friends must now find a way to match the strength of their new opponents and once again use their powers to prevent a large time-space disaster from happening – an event which threatens not only their world, but multiple dimensions!

The young girls have discovered the truth... the cruel fate of a magical girl. Madoka's best friend, Sayaka Miki's Soul Gem turns pitch-black as its owner falls into despair and it is transformed into a Grief Seed. Upon seeing this fate, Kyoko tries to save Sayaka, and ends up sacrificing her own life. One magical girl after another is destroyed. Throughout it all, there is one magical girl who continues to fight alone - Homura Akemi. All this time, she has been acting with one goal in mind. "I promise... I'm going to save you, no matter what it takes." Homura renews her vow. And then it happens - a miracle powerful enough to sway the fortunes of the universe...