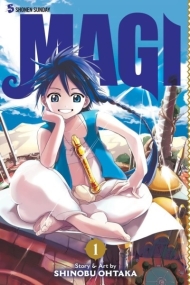 To be honest I only rate this manga a 5/10 because the first half is actually pretty decent/good. In fact I'd say the first 250 chapters are a 7/10. But the chapters afterwards vary from 1-3/10, so that's why it's a 5/10.      I can't really be bothered writing a whole comprehensive review, but I wrote some thoughts on how it ended in the dead forums, so I'll just copy and paste those here since I don't see too many reviews that do anything besides 10/10ing everything here.      Read below and enjoy I suppose. Beware there are some heavy spoilers below, but most of them you'd be able to predict or expect several chapters in advance.      I recently came back and re-watched all of the anime seasons, and re-read the manga afterwards. I felt I needed to brush up my memory before finishing the manga since I last stopped around the point when Aladdin shows the world leaders Alma Torran and how their world came to be.      As the manga progressed it gradually became more and more of a let down. Characters lacked consistency in how they acted as the manga went on, and the plot arcs at times are almost separate from each other. Character development was also mostly character power ups that come out of no where.      I feel like the manga should have ended with Gyokuen/Arba being defeated, and around the same time in the manga as well. Like when she is "killed" by Hakuryuu but not really. Have her die to the protagonists so they can stop a 2nd coming of the apocalypse, and then keep Alibaba and Judal, or whoever the author thought should die, DEAD.       I actually wouldn't have come back to this manga if I had foreseen it'd eventually fully embrace shounen gimmicks. Up until the arc where Alma Torran's past is revealed, I felt that the majority of the manga's flaws were excusable. The way the manga was written up until that point, it felt like the author had planned a good portion of the story and the world's logic properly. Then it just gradually went on a downhill snowball effect of bad shounen tropes and gimmicks from there.      Like it really did feel like when Gyokuen/Arba died, the author seemed to have intended to end the manga there, but it was selling too well and whatever magazine it was being published in forced the author/editor to keep the manga running until it could run no more. This felt especially obvious in the last few arcs of the manga, and especially the last manga of the arc.      Time skips that skip over significant events, convenient power ups, power ups that straight up don't make sense and aren't properly foreshadowed, characters coming in and out of relevancy randomly, characters literally re-written to suit the plot, the list goes on.      That final arc was an abomination as well. Literally every other chapter there's an a** pull that is explained with mumbo jumbo. You can tell the manga got axed by the last chapter for two really obvious reasons too, By how rushed Morgiana and Alibaba's marriage is since there aren't enough pages left to let people enjoy a full proper ceremony and have characters react normally. And by how it ends on a note of "well our characters are still out there adventuring in a whole new world we haven't told you about yet, buttttt we can't tell it to you because we got axed... And we probably never wanted to write up until this far anyway"      Overall I was very sad and disappointed with this manga by the end. I wish I had just never come back and kept my memories somewhat rosy with it.

I don't write reviews very ofton, so bear with me please.  I know this alreday looks like I am a stupid fangirl that is just hitting 10 in each category for the sake of fangirling, but let me explain... story: All over the world strange buildings caled dungeons appeared. They offer great treasures and also power to the ones who conquer them, but few dare to try, since many failed already and never returned. However, Alibaba decides to try his luck together with the strange kid Aladdin wh turns out to be a magican.  I can't tell you more because i don't want to spoil anything however the further progress of the story is truly amazing. There are so many aspects and arcs, places, times... this manga covers, that at some point you really get a feeling that you know more about this world than most of it's inhabitants. It's also quite thrilling because there are so many aspects and myseries to be discovered since the story and  pre-story is just so ever expanding and gripping and yet there are still some things you want to find out and are unsure about. A huge plus is also that, even though the story itself deals with various serious topics, there are always moments that are just relaxing or more commonly plain funny.  I am not gonna lie, this manga really had me on the edge of my seat trembeling with excitemet and loughing like an idiot in public so ofton that I lost count. As much as I love the story itself, the charcters are what makes this manga so very addicting. As a girl the first thing I would tell another girl would be that the guys are incredibly hot (not lying, "husbandos" everywhere)  in a more serious conversation I would say that there is just so much depth to every single one of them. They all have an unique personality, storiy, philosophiy and few fit into a stereotype.  The authors gives the reader time to get to know each "important" character, but doesn't give to much insight to make it boring. Really, the most interesting aspect to this manga is that you love all those characers very much, yet you are never really sure what they are up to. It really makes you feel worried, sad, surprised disappointed BECAUSE you really develelop a connection and start to relate to them.  Special shoutout here to ladykiller Sinbad. I have rarely seen a character this well developed before.  As a final touch there is this beautiful BEAUTIFUL art style. Miss Shinobu does not only know how to draw a manga, she knows how to make a page appealing, interesting, toys with perspectives and in general is just an incredible manga artist. Especially the way she draws eyes and captures expressions is one of a kind. There is so much love for detail, every other page is just a masterpiece and that alone makes it worth reading.  Also, her characterdesigns are great. Again, we can clearly see a love for detail here and also all the effort that went into it.  Overall, this Manga was pure joy for me. Even though there were "pieces" of the story or characters I didn't enjoy, the overall impression this has left me with is: "OMG this is sooo awesome!" So if you are looking for a action/adventure/fantasy manga, this is what you should read.

To think the first volume I read at Barnes and Nobles would get me hyped into the world known as Magi. And to think I was able to get into the series before it ended was a huge blessing. I will admit with complete honesty that I wish Magi was one of the first Shonen series I got into when I was a kid because it gets so many areas right. Now I will explain what it does right. Story- In a world similar to that of Scheherezade's tales, a mysterious young boy named Aladdin drifts from place to place with his djinn Ugo. Ugo lives inside a golden recorder, and Aladdin is on the hunt for his true container "The Djinn's Metal Vessel".One day he encounters Alibaba, a poor lad determined to enter one of the mysterious Dungeons that popped up a decade ago in order to make his fortune. Thus the the two begin their adventure in a Persia that never was. Art- A good series always becomes better with a good artstyle, which this series has. From the amazing fantasy elements to the cities and villages influenced by real cultures and places, to the fights and character designs. Aladdin and Alibaba look really good during these scenes, and to think the author did this on a weekly basis. Shinobu sensei is a genius. Characters- Now the characters are easily the best part about the series. All of the main characters get such good development, like with Aladdin, Alibaba, Morgiana, Hakuryu and also Judar. I loved how the author develops Hakuryu, with not just revenge on the part but how he grows beyond it. It just feels proper compared to how Kishimoto handled Sasuke from Naruto. I have always thought that the author always placed a big importance on a character. It isn't a matter of where they come from but how their choices define who they are.  Overall- I am really glad I got into Magi. Its like that one really good shonen series that I wish came out when I was growing up, when I had to put up with the disappointment I felt with Naruto, Bleach and in some ways One Piece. Magi is a series I believe is meant to be read by volume or all at once since its a weekly series that only has so much content at a time. For a shonen series like Magi, it got to be so philosophical. It makes you question what is destiny, what is good and evil, and the politics. The series itself is a slowburner, but its ideal for its pacing. There is always a goal in mind with the characters and that is a big plus for me. Contrary to what people people say, like  thor123, I felt like the ending was satisfying. We see people are rebuilding SPOILERS after the war with David, Aladdin realizes his wish for friends was granted, and Alibaba and Morgiana got married! I feel the story didn't get stretched like One Piece, it reached an ideal length for a series, although I felt bad for what happened to Sinbad at the end. Overall, I am happy with the series because it did stuff right. 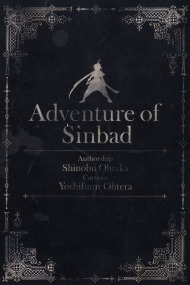 Magi: The Adventures of Sinbad 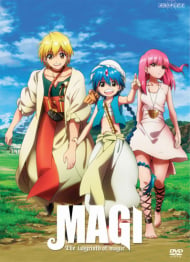 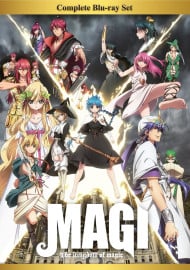 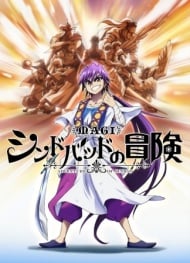 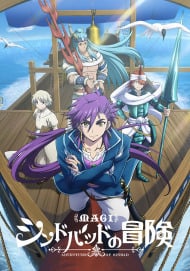