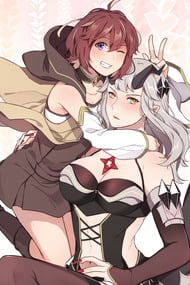 Adventurers seek to take the demon queen’s head, but a young female mage wishes to take her hand.

Good read, it's a romantic comedy where the girl keeps trying but the queen says no, but really enjoyes the attention. You pretty much know exactly what your gettin and it delivers it well. it also get's surprisingly real later on with death being seriously brought up and just how annoying the "constantly coming back after rejection" thing would be inr eal life, but not enough to take away from the story.The main problem in this is Queen Vel. For most of the story Vel is just your typical tsundere before they melt, she's insulting, violent, and doesn't believe a romantic word said, only with explosions. As the demon queen she's THE plot device in this world, not just for Malori as the would-be love interest, but for the world at large Vel is the strongest thing alive or at least by far the strongest thing even hinted at. But until the last dozen or so chapters she get's nothing, she get's less then the snake lady. The only reason to invest in the romance until the end of Season 1 is Malori's stubborn love, they look great, and we know they'll get together. That all being said it's still a worth while read if you want to smile and this is your thing. Oh and the art's pretty good, not mind blowing but leagues better then other manga/webtoons I've seen.

Absolutely lovely series! The first season is essentially a romantic comedy, but it fully addresses how unhealthy the relationship was growing to be. Well, it doesn't really start in the first season, but it's very, VERY one-sided and... Well, unhealthy all around. But the series addresses it before you have long enough to start feeling gross about it, and with all the lovely comedy, and the fact that despite the unhealthy nature, both parties DO desire the same outcome, it has the full effect of being a quirky and lovely teaser-style romantic comedy. It also has very subtle storytelling overall, though it's easily the least story-heavy season, it's all about establishing the characters and their circumstances, not telling a story really. Then Season 2 happens, and oh wow it's so much better. It turns into a much more traditional storyline for the main characters, and becomes a much healthier relationship. It's also a lot funnier than the first season, in my humble opinion. The first season's humour did start to grow tired, but season 2 changes and grows the style, while mixing it with subtle and building story. The humour, relationship, and story feed into eachother in ways you would never expect, and the payoff is incredible. They introduce a bit of a "love triangle" misunderstanding, but it gets cleared up VERY quickly, and it gets used for humour, not melodrama. Season 3 is still coming out, but it's shaping up to be the best yet. Spoiler alert, but they DON'T fall into the terrible practice of most romantic comedies by splitting the couple for pointless drama. In fact, they reinforce it very quickly multiple times. I don't really like a couple details, as of episode 12, but they're suggesting that those details will be resolved fairly quickly now. If that sounds vague, that's because I don't want to spoil too much, but let's say that the problem I have is minor and hinted at all the way back in Season 1, the storytelling is that good. Overall, Mage and Demon Queen is absolutely wonderful, I can't recommend it enough. The humour is wonderful and light, despite a lot of innuendo and straight-up sex jokes. It does a fantastic job at making you laugh, letting you empathize with the main characters, and doesn't tease you with the things you want to see- It gives you what you want to see, and leaves you wanting more and more. It isn't for everybody. If you get uncomfortable with sex or kink jokes... I mean, you'll be turned away before a third of the way through the first season. It also has a bit of slow-burn to it, in that even though the jokes and attitudes are established quickly, it does take most of 2 seasons before you get to The Scene. And by the end of those two seaosns, the story has begun to pick up, so while it remains very funny, dramatic storytelling does become dominant for a lot of the season. For a pure comedy, it ends at season 1, and it never dips into True Drama or Smut territories. If that's what you're looking for, look somewhere else, but if you want a series that provides a symphonic experience where every element compliments every other element, it impresses consistently. And the art is wonderful. Had to throw that in there.

We are at the beggining of the 3rd part, and I read all of it in one round, the chapters are really short. The first part is a good romantic comedy, but the 2nd and 3rd part are more into the strory and some drama and it is for the best, i'm really looking for the 3rd part! LIGHT SPOILER: It is a caricature of the isekai genre, but a good one 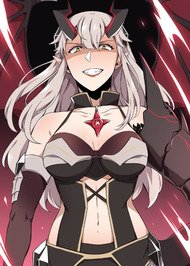 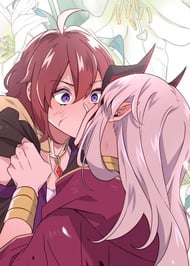