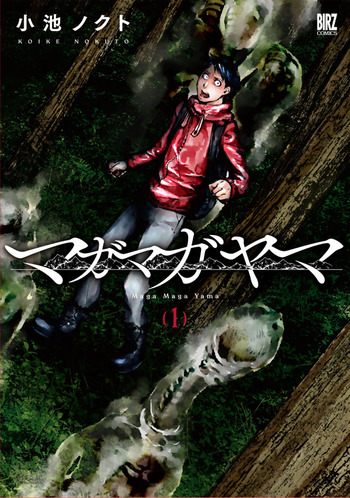 The students of Kamishiro High-School Class 2-A swore revenge on their homeroom teacher, Takao Nanami. Against her, a fake suicide had been concerted, meant to be played out by one of her students, whose actual death would later sink the class into confusion. Who soiled the water with blood? Skinned of its trust, their friendship became an urge to sate each other’s hunger.

The "dramatic bio horror" manga is set in a world where a new disease is spreading through humanity, one which turns humans into amoebas and slime molds when they are too stressed. Whether someone lives or dies during the process is a roll of the dice.

Three years ago, a deadly accident forced the closure of Cofdeece, a residential and scientific facility located 6,000 meters beneath the ocean. Now, Kengo Kadokura has been sent to the newly-reopened underwater structure by its new corporate owners, and alongside other engineers, doctors and workers, he will assist with the reconstruction efforts. But when the body count begins to rise, the crew soon realizes that there's more going on at Cofdeece than meets the eye...

Katsuragi Shiho casually handed her house key to Shikibu before leaving her hometown. After not returning on the third day as she had promised, Shikibu probes around and finds a lead that brings him to "Yasha Island". However, the strange rituals being held on the island, Shikibu's investigation records getting stolen, and finding Katsuragi's name in the house of blood among other mysterious occurences all point to Katsuragi having vanished into thin air! Shikibu is bent on finding out the truth, but the islanders all seem to have been silenced by somebody...?!

A tragic loss. The endless despair that accompanies losing a loved one. A mysterious girl who appears at just the right moment. An unbelievable offer. "I can bring your lost loved one back to life, if you complete a simple task for me. Please kill three people, any three people, in the next 24 hours. Do that, and without fail I will revive them just as they were." Could YOU take three lives to bring someone you love back from the dead? What value do you place on human life?