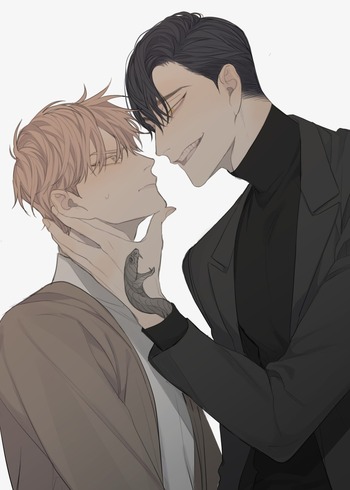 Oooooh I'm really into the premise. Hamin the MC is the son of a Mafia gang and doesn't want anything to do with them and through many hardships he's made his way but unfortunately all his progress goes down the drain when he's kidnapped by a rival gang to blackmail his father or atleast that was the plan until he hamin was "rescued"  by the 'mad dog' (Sehyuk) from his father's gang. Now he's stuck with with the mad dog as his dad assigned babysitter. Sehyuk as his nickname would suggest has a few screws loose and finds the earnest of the Hamin amusing and Hamin is constantly flustered by him. I'm such a sucker for this dynamic god help me 💀

The manhwa has about 10 chapters so far but I gave high hopes for it. It kind of has a similar vibe as the author's previous work, I really hoping that the conclusion to mad dog makes more sense than their last work lol. Overall this manhwa is 10/10 imo 🙃