Alt title: The World of Machida-kun 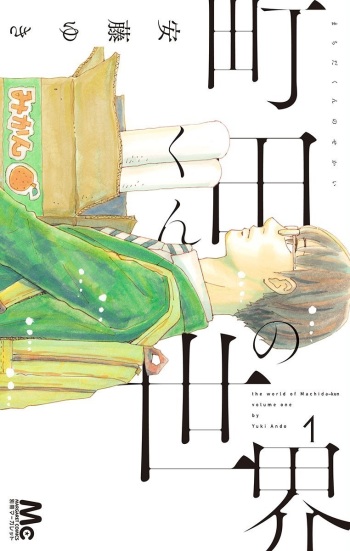 Hikaru misses her dead brother and speaks to him in her mind as she begins her first day of high school. Here she has many ordinary adventures. She becomes fast friends with a girl named Nene, who lets nothing stand in her way and pushes Hikaru to kiss her new crush, Michiya, who reminds her of her brother. He lets her kiss him, which as it turns out is not a good sign. He seems to be a jerk, whose personality is nothing like Hikaru's brother's. Michiya's best friend Jun warns Hikaru ahead of time. Later, Hikaru finds out the bad side of her new friend Nene. When Hikaru understandably gets upset about this, Nene gets angry at her and tells her to find another friend.

In a rainy spring day, first year high schooler Midori Saejima saw a tall, handsome fellow student take care of a stray kitten. Without knowing the boy's name, she fell in love with him at the first sight. Due to sickness, Midori returned to school three days after summer vacation -- only to find out that she was "volunteered" as a candidate for student council. After a series of embarrassing accidents, both she and the mysterious boy she had a crush on, Akira Sudo, were elected as members of the student council. Being the first student council of this newly established high school, they are about to create "new traditions" for their school and a bittersweet love story for themselves.

When Momoka, a very shy girl who loves rabbits, is forced to change her seats, she finds herself at sitting at the back of the class, next to a boy she has never spoken to before, Narumi. Everyone thinks that he is strange and all of the girls are afraid of him. Why? There is a rumor that he is cursed and that the girls sitting next to him will never find love. Momoka believes in the rumor and fears him, but she gradually discovers the true Narumi and eventually new feelings are taking a hold on her. Is it friendship or... love?

One day, after borrowing her friend’s high school uniform and taking a walk around town on a whim, Minato runs into her younger stepbrother, Toru! Toru believes Minato when she insists she’s someone else . ..but now it looks like he’s fallen in love with her high school girl disguise?! A weird, weird love story begins!

Ichino is a high school girl who absolutely hate guys due to the fact that her father betrayed them when she was young; stealing all the valuables that she & her mother possessed & disappearing without a trace. Since then she has vowed to become strong so she would not lose to any man. She has also longed for the day she could meet the lady from a fateful encounter in her childhood. One day, she accidentally beat up a guy who she mistook as a pervert pestering her friend, Miyabi. She tries to apologize but ends up beating him up even more.... She developed a distaste for the guy and two of his friends as they bump into each other once again resulting in more misunderstandings. Ichino personally believed that if she came across the same person thrice that would be considered 'fate'... Coincidentally, the start of her school begun with a surprise as she found out that all THREE of them turned out to be her new classmates !!

Totoki Atsumu tries to win over and bring back the real smile of the first and only girl he's ever liked, Kurihara Akane. That would be simple, if it wasn't for Akane's unusual past...

Fuuko is a happy and cheerful girl. One day, two cousins, Daiya and Ichi, move into the apartment upstairs. Cold Ichi and mischievous Daiya gave a very bad first impression! All three are going to the same school as well! How will Fuuko's high school life turn out?

Revisit each of the Yamada family members as they have all grown up and well!

Kawai Yuuko begins in junior high. Throughout the passing years, she grows up and sorts out her life with her friends, her parents and her love.