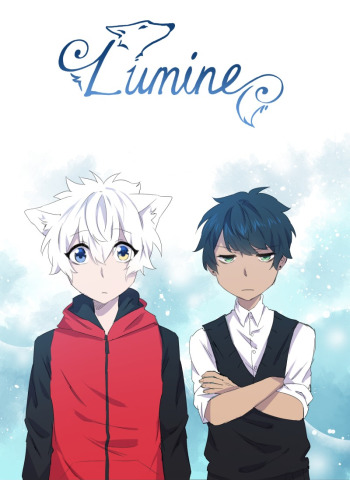 I know this series hasn't ended yet but since season one has come to a closure, I decided to leave a review!

The story is about a werewolf, Lumine who has been taken under Kody's family as a body gaurd. Turns out, he gets fired and instead becomes a really good friend of Kody. They get attacked one day and have been teleported to Lumine's home. Honestly, I'm not into the whole animal side of stories but this webtoon makes it so interesting! The werewolves and weredogs are extremely interesting, especially Lumine! The story is very captivating and it's well written. It's definetely really unique and I get so hyped to see newer chapters.

The art isn't mind blowing but I definetely fell for it. It's very charming and cute, ESPECIALLY when they draw Lumine as a small dog. It's so cute. it makes my heart melt.

I might be a little biased when it comes ot this review... BUT! I fell inlove with the main two characters, especially Lumine. Lumine is a bright, air headed and soft character with a very interesting story. We do not know a lot of his past yet but his character development is so interesting! As for Kody, I definetly really like him. He's a very closed of person that starts to open up to Lumine and I really like the bond between the two characters.

Only season one has come out and so far it has been such a great read! The plot twists, cliff hangers, character development and bonds build throughout the story is so intruiging and compelling. The art is very aesthetically pleasing and overall is a nice story to read!

My comfort webtoon. I started reading it out of pure curiosity and ended up binging the entire thing. I love action + supernatural. You can read it here: https://m.webtoons.com/en/fantasy/lumine/list?title_no=1022&page=1&webtoon-platform-redirect=true