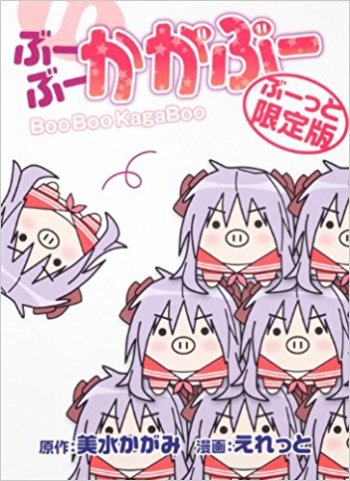 If you're looking for anime similar to Lucky Star: Boo Boo Kagaboo, you might like these titles.

The short follows the shy and kind-hearted Bu-chan and his unusual family as they get into both slapstick and heartwarming situations.

Spencer is a typical third grade student with a not so typical ability: when he writes entries in his diary, they come true! In addition to causing his family to eat fried pencil balls for dinner, Spencer makes the ultimate mistake when he writes about a horde of flying pigs. And though he’s able to erase all of them from existence, one of them slips through the cracks and remains a reality! This pig – which Spencer dubs Sunny Pig – becomes Spencer’s companion in his everyday adventures. From trying to stop Spencer's father to cooking dinner to solving the disappearance of a local weather reporter, there’s plenty of fun times to be had in the life of this wacky family!

Noriyasu seems like an average third-grader, but his life goes haywire after he catches his mother reading his private daily journal. In an effort to astonish her, he begins writing outlandish lies about a giant snake in the bathroom, cooking pencils for dinner, and a rain of pigs, but Noriyasu is the one who’s shocked when his writings play out in reality and everyone else treats the events as normal. Things become even more chaotic when he takes several stabs at being a newspaperman, producing news that becomes the talk of the town and one resulting in an apocalyptic porcine holiday!

The Prince of Tennis Mini Theater

My Wife Is the Student Council President! OVA: Okusama Gekijou

Recently, various food-related issues have been plaguing everyone, from Ami’s pudding woes to Yuri-sensei’s curry rejection. In an effort to cheer everyone up, Ryuuji’s foolproof plan is to take them all to a family restaurant. However, with each visit, a chance encounter with Minorin soon turns his plans upside down. Whether the pair ends up in a battle over which is best - spaghetti with meat or seafood - or comparing their knowledge of curry, their time together always manages to be eventful.