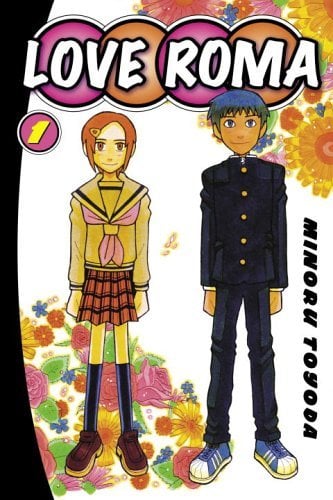 Both mangas are cute and unusual Seinen romances. Both are a stories about really weird high school student (boy in Love Roma, girl in Mysterious girlfriend X ) suddenly starting a slightly bizarre but really charming romance with a  normal student. Whether it's complete honesty and ability to express your feelings in front of a large crowd (Love Roma) or a relationship based on drool, that can convey emotions (Mysterious Girlfriend X) those unusual stories are very heartwarming.

Both mangas are trying to answer some relationship questions (like how to understand the other person, or what dating each other means). The main difference is that Mysterious Girlfriend X is a bit more on the ecchi side, and Love Roma is more on the absurd side.

Both manga are seinen romance comedies about a bizzare high school couple. Simply, if you liked one, you can't go wrong with the other.

Insecure, socially-awkward and with a habit of making sudden and profuse apologies, Asumi Torii is a strange girl who often fails to click with her peers... she also has an arrow stuck in her head. For new transfer student Ryouji Yamada, however, Asumi is the most interesting girl he's met. Simultaneously fascinating and unsettling though she may be, he dedicates himself to getting to know her and finding out what makes her tick. However her bizarre outlook on life - combined with the razor sharp arrow protruding from her head - makes it a painful learning experience for Ryouji.

If you finished reading this series and are looking for another similar one, then look no further. Both Subete ni Iya Girl and Love Roma are high school rom-coms about about weird kids that are at least a bit odd. If you liked one, I'm (nearly) certain you'll like the other one too.

Morishita Akane is the captain of the basketball team in high school in spite of her small statue, but not good at anything except for it and almost never favorite with schoolboys, but Tsuchiya Toukihikou, a model student, has liked her and says so to her.

Spring has arrived, and at this school, a teacher and young budding girls. What will be their fate?

Hana Tabata is a lonely and unpopular high school girl with negative thoughts. Early morning in the classroom when she was pretending to be a manga heroine, the class's good looking Yosuke accidentally saw her...!?

An unexpected love starting from an unplanned kiss. Fukami-kun is a smart, good-looking guy who's popular with the girls. But in actuality, he's a disappointingly stubborn boy who refuses to accommodate anyone else's schedule, leading him to be rejected even after being confessed to. One day, a strange girl, Higurashi Akio, is looking for her cat around the school grounds, and the two of them somehow end up kissing by accident. Unlike Fukami-kun, Akio doesn't seem to care about the accident at all. At first, Fukami-kun is irked by her attitude, but gradually comes to hold an interest in the capricious Akio.

In the year 20XX, the decline in birth rates is a serious problem. To counter this, the government has established an outrageous academy. The academy's goal: "To teach boys and girls how to properly date, and in the near-future create good families through marriage." In a school where the doctrine of "love" has gotten out of hand unfolds the ultimate love battle of two virgins!