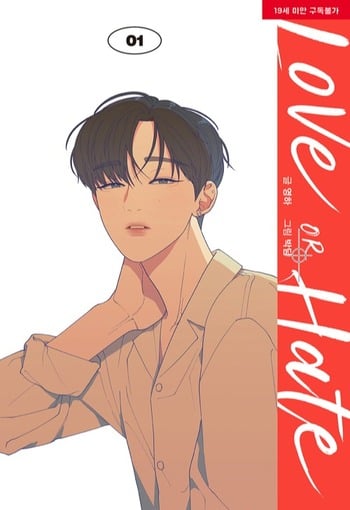 If there is anything that ties these two otherwise contrary webtoons together, it is there atmosphere. When I first started reading Love or Hate, I became immediately reminiscent of when I first read Walk on Water. The sexual tension conveyed within the panels is infectious and is what makes these two series some of my top reads. The main characters do well to carry the plots with unconventional traits and not-your-cookie-cutter motivations. I find parallels between Ed/Yeowoon and Lee Haesoo in there private, self-loathing selves. They both use sex as a (temporary) solution to something in their lives whether that be finanical issues or identity crisis.

I Work For All

In a reality that may not be too fat from our owns, everyone has a existing values. The value determines what a person can do, or can’t. When the value gets to zero, the government thinning program will automatically take away the person for the better use of the social resources. And our main hero, Sean Lee, finds himself stuck in this world. What’s more, he has no motivation to do anything…

At a class reunion, Hazuki was reunited with his classmate, Watari with whom he used to have a relationship. Seeing Watari after so long, his slenderness and gentle expression hardly changed since then. For a moment, Hazuki was thrown back into his memories. Those hot summer days that lead to the unstoppable urge to feel… Now that it came to mind, love was what it was. Will a reunion after 5 years apart reignite again the passion that was once there?

Yuuma Kuroki leads a normal life as a salesman at a bank. But, one night, he's taken into a hotel room by his favorite celebrity, Kanade Nikaido. "Please help me..." Kanade pushes Yuuma down onto the bed and mounts him... Yuuma's mother suddenly tells him she's remarrying. As if that weren't hard enough, his new dad is his boss! As he heads home from work surprised and confused, Yuuma encounters Kanade, who leads him to a hotel room... Later, his new dad introduces him to his new brother... who turns out to be Kanade!

Two siblings, Joo-won and Hee-won, both feel isolated after their parents separate due to infidelity and remarriage, placing both of them in new families. However, Hee-won's new step brother, In-hyuk, notices Hee-won's suffering. Is he determined to take care of her, or is there something more?

Eight years ago, our parents remarried and we became brothers. Haruto is six years older than me. We’re not related by blood, but he treats me kindly and takes care of me as if I were his real brother. Because of this, I started harboring this desire to monopolize him…. I don’t want him to find out about these dirty feelings! Although I live alone now that I started university, my brother found a way to come after me….!?

The Inheritance of Aroma

The story of Shinobu and his stepbrother Takezou's adulthood.

'Noel', who searched and attacked the traitors of the organization, found a man called Kang Jin who referred to himself as nothing but an ordinary homeless person! Even though there were also powerful threats, Kang Jin, the one who ended up fetching Noel's interest, claimed to be unrelated till the end, turning out to be imprisoned in Noel's own officetel... What are the secrets hidden by Kang Jin and Noel's true intentions?

Yoshiya thinks it’s fate when he’s reunited with his first love; however, he learns they can never be together … For middle-aged scriptwriter Makoto and beautiful actor-in-the-making Yuu, it’s a chance meeting in which admiration turns to love, and love turns to doubt …?! A young and heartrending adolescent love story and a bittersweet mature romance. The stories of a group of men who mingle, intertwine, and change.