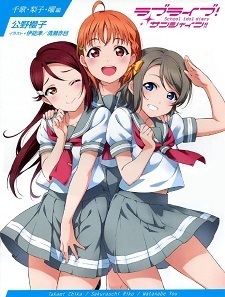 If you're looking for anime similar to Love Live! Sunshine!! School Idol Diary (Light Novel), you might like these titles.

Maigahara Music College Affiliate School Maigahara Senior High. At this academy that gathers the most promising musical talents, there's a rumor circulating among students. "If you give an amazing performance at the school festival, you get special extra credit (or so they say)." Serina's grades are not very good, so she immediately believes the rumor and decides to form a band! Rehearsals, sleepovers... even cosplay? Everything they can imagine will become part of their colorful daily life. But will they really be able to give an amazing performance and get the rumored credit!? The curtain rises on the story of the daily, funny lives of these girls!

Nijigasaki High School is known for their diverse subjects and the freedom they give to students. Second-year student Yu Takasaki has been turned on to the charms of school idols, so she knocks on the door of the School Idol Club with her friend, Ayumu Uehara. Sometimes friends, sometimes rivals, the members of this club each contribute their own thoughts and motivations to the group.

With Otonokizaka Academy saved by Honoka Kousaka and members of µ's from being shut down, students are now back to their normal campus lives — for a brief period. Members of µ's are now brought back to the stage and compete with other idol groups for regional tournaments.