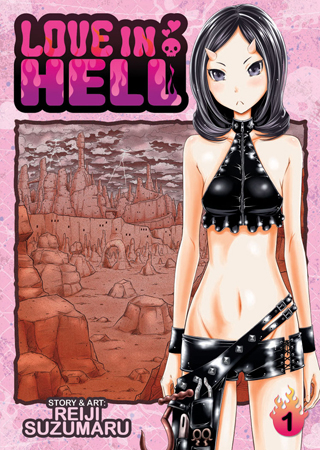 Both series take place (at least partially) in hell and are extremely disturbing (over the top gore and grotesque is only a part of the reason for that). While it is a little bit too much for me, fans of one of the series would probably be able to stomach the other one.

they do have some compatibility, with dark humor and hellish themes...still dorohedoro is much much darker while love in hell is much sweeter

Demon Loli in charge of underwhelming MC. But that's ok because MC still gets himself into weird sexual situations.

Simiilar because of female loli demon with more power than MC yet still manages to listen to him.

Demons, sexual content and romcom: three elements that you'll find in both manga. Love in Hell has an atypical setting, somewhat unique (a romcom in Hell?). Oretama is just absurd (the Queen of Terror stuck in a teenager's testicles?!) and if you like ecchi, I feel like this should be a must read.

another pair that has many similarities while being very different at the same time...if you liked one, you very well might like the other one and not get bored (and both endings leave you wanting for mooore)

in fact, it wouldn't be much of a stretch to say they share very similar lore (not identical though)

With the world destroyed after the summoning of Devilman, his human host Akira Fudo finds himself a tenant of Hell. Seeking the soul of his lost love Miki, Akira comes betweens a man’s search for vengeance and earns the ire of Hades. To save Miki and survive life after death, Akira will need to let his true demon out as Devilman faces off against the Devil himself!

An over-the-top, vulgar, grotesque and yet hilarious gag manga about a cute little girl in hell.

Life in hell is like peaceful, ordinary life in some ways. The kids live in a place like a dorm, and they go to school. However, every person that has fallen into hell has some kind of punishment. Eto Juri falls constantly into hopeless love, sometimes even with inanimate objects. Hida Mari is compelled to always eat carrots, which she hates. Ando Natsumi is ridiculously popular, so that even the textbook problems are about him. Soon a newcomer joins them, Nakamura Mikoto, who frequently mangles her words and becomes impossible to understand. The four of them live through their peaceful school life--in hell!