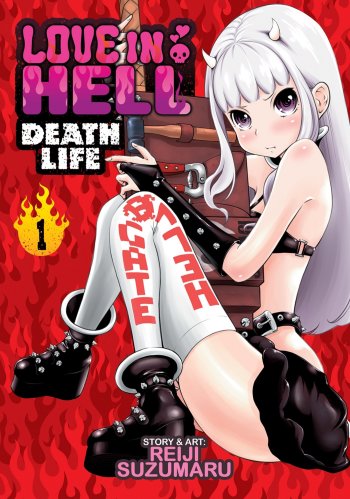 So it probably wasn't a great idea for me to read this immediately after reading the original Love in Hell, since it retreads a lot of the same ground but while being less funny. Quite a few new characters are introduced, probably too many. The story's centered around Sanagi (a devil who had Momone-level grades in school) and feir sinner Sousuke. We also see Sanagi's friend, Chiko, and feir rival, Homore, along with both of their sinners. And we see Hana and feir cute, but delinquent sinner. And a poser tough-guy sinner who pops up a couple times. I did like the bully's character design--the scar across feir eye was cute. The pile-on of characters is likely to make up for the fact that they're not very fleshed out or interesting.

What does this manga add to the world which the original story didn't already do? Well, it focuses a lot more on the torture that the main character goes through, being more explicit and creative with the gore. And I get the impression that Sousuke is willing to suffer through more intense torture than Rintaro was ever willing to go through. One of the big ideas is that Sanagi is very meticulous and conscientious about being a good torturer; fe got exceedingly good grades in school and fe wants to do equally well in the field. Sousuke was very moved by Sanagi calling fem "my sinner" and feir general possessiveness of fem (which is something I find more creepy than sweet, but whatever). Just like the original series, the main character comes to an epiphany about the singular sin which brought fem to hell (which is a stupidly simplistic set-up, but whatever), recognizes what fe did wrong, and does something which shows that fe's changed.

And they all lived happily ever after in hell.