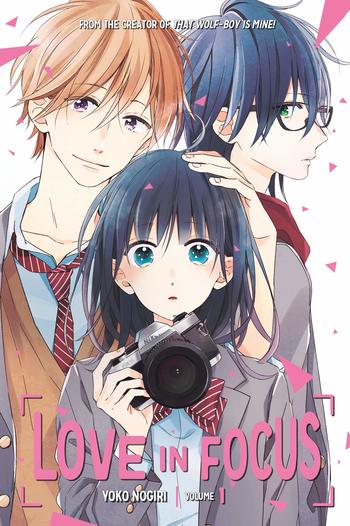 That Wolf-Boy Is Mine!

After some traumatic experiences, Komugi Kusunoki transferred from the city to start a new life in rural Hokkaido. But on her first day of school, the school heartthrob Yū Ōgami blurts out, “You smell good!” Despite the hijinks, Komugi tries to adjust to her new school, but it’s not long before she stumbles across Yū dozing off under a tree. When she attempts to wake him up, he transformed…into a wolf?! It turns out that Yū is one of many other eccentric boys in her class year–and she’s the only one who knows their secret…!

These are both by the same author and both are small and awesome. They are a must read from me. Hope you like my reccomendations.

It has a  long dark haired ML and a straight foward FL.

Both are pretty cute romances but I personally prefer Horimiya.

"You have a nasty look in your eyes!" "You’re freaking tall!" 172 cm tall and with sharply slanted eyes Yuuri has a complex about her appearance. Her best childhood friend, Itsuki, starts dating the petite and cute Moeka and breaks Yuuri’s heart... High school cameraman Jun takes an interest in Yuuri making her want to become cuter for him...?!

Yanase Touko is a high school student and photographer. She is asked to take a photo of Setsuna, a very popular fashion model. She tries to consider it to be just another job, but finds herself responding to his suggestive gaze.

Photography club member Maki takes ordinary pictures, instead of exciting ones. A simple-minded and innocent girl, she has a hard time voicing her feelings, like her crush on teasing Doujou sempai. Her quest to take more interesting pictures leads her to a boy who always speaks his mind. Drawn to his bluntness, Maki's feelings are becoming a lot less simple!

The age-old dilemma of choosing between your friend and the one you love is the lesson for the day for these bubbly high schoolers. 16-year-old Karin Karino finds herself torn between keeping the friendship of her classmate Yuka and entertaining the advances of a boy named Kiriya. Plain-Jane Karin experiences the gut-tingling roller coaster ride of her first love and first kiss as fate pairs her up with Kiriya, who also happens to be Yuka's object of affection. Through a series of chance meetings, Kiriya discovers the exquisite beauty lurking behind Karin's thick glasses and coy demeanor, and asks her to be his girlfriend. But living happily ever after in high school isn't on the curriculum, as Karin soon finds herself the center of Kiriya's attention, as well as the bulls eye in embittered pal Yuka's dartboard of hate.

Seto Atsushi, the student council president, is tired of spending his days in the student council where there’s nothing but boys, and decides to recruit new members, but on one condition: they must be girls! Then Ozawa Kanae, a former delinquent, shows up in the screening for the secretary position carrying a bamboo sword…?!

Nishino Fuuka, an ordinary girl, finds her classmate, who's always dozing off in class, sleeping. She tries to wake him up, and succeeds. He asks her to come with him. She does, and discovers that he's the famous 'high school photographer'. What will happen next?

Even though Ayumi is not feminine at all, Ayumi is hiding a secret about her identity. Ayumi, being a definition of a tomboy, has always been ridiculed by this. A certain kouhai photographer, however, out of the blue confesses his admiration to her... and to be a model for a photography contest! Ayumi cannot comprehend how someone finds her true self admirable, wouldn't her model self be a better choice?

A girl with a strange mother brings home a new father and stepbrother. She loves photography, and her new stepfather is a photographer. They begin living together and have to overcome many difficulties.