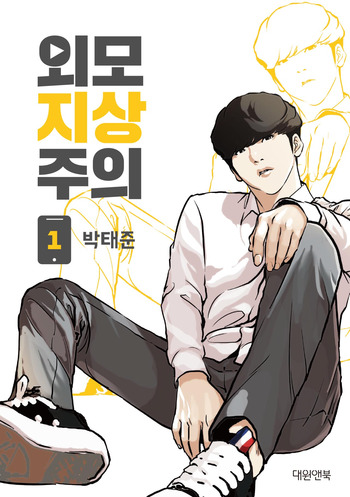 Lookism is an anime which pulls out the dirty truth about discrimination in our society, where we view people based upon first look and assign them a certain status. If you're attractive, you're successful and an asshole; and if you're fat, you're a loser and a kindhearted, good person...

I see all of these review praising Lookism for how it breaks down the sociobarrier of discrimination and underlines a TRUTH in bullying present in our schooling system. How is the bullying in this manwha in any way relevant to real life? The bullying presented here is of constant extent, having never cops involved, parents or teachers in sight (despite it taking place in a school) yet fights break out every 5 seconds and gangs relentlessly whailing the crap out of each other.

We meet our main character Hyung Suk whose life is turned around as he is given the opportunity to switch bodies with an alternative, healthy and attractive body. He realizes through this newly found body how society truly torments him. How people are two-faced as they are in the real life. This is reality. It is truth, and I cannot deny it. However, this manwha takes abuse to an all new level. In the school society, fights break out every day; at every new interval. People can't come to a fine understanding and resolve it with their fists. Supposedly, this school that the manwha is covering is a decent, private highschool, so fights of this nature and scale should be nigh inexistent. However, it's not ONLY the fights. We see children being bullied to the extent of having pens drilled into their skin or forced into pubic humiliation. Do you really think society would let that go? For people to let this story carry on is just sad, it's obvious the author is reaching into his pockets in desparity because he has already used the same gag 10 times within 30 episodes and needs fresh content. "Let me add a fight scene here where the two characters fighting have a complete misunderstanding of each other" seems to cross the authors mind every 5 seconds...As someone who was subject to minor bullying from my middle school and high school, seeing an anime mistreat the topic of bullying in such a manner is disrespectful. I want this problem resolved, I don't want people feeling sorry and empathetic towards me because they think that 'this' type of trash happens on a regular basis.

To be completely honest, I wanted to give this a 0/10 but I'll let it slide because at least they are colored. Let's see...where do I begin (I will cover the ones specifically that I have seen)

Park Hyung Suk (Daniel): Our main character, who is a cry baby and seems to be as blind as a bat when it comes to deciphering information or interpreting what is going on around him. He is granted a celebrity supermodel image one day (somehow) and now is HOT as a whistle! Despite never having to train this body or work out, it stays perfectly sexy! (don't ask me how, I don't know)

Hong Jae Yeol (Jae): My favorite character. He doesn't talk at all and is richer than Bill Gates. He honestly is just here in the story to give Park expensive things for free and then vanish, only to be slapped in once more for a random ParkxJae gag.

Lee Jin Sung (Jin Sung): The first person to pick a fight with Park. Spoiler Alert! He loses. (somehow getting relentlessly whailed on for 3 years allows you to compete on the national level boxing). He then becomes buddy-buddy with Park and stops fighting to appease Kim Mi Jin despite being riled up every episode for not fighting. sigh..

Kim Mi Jin (Mirai): Lee Jin Sung's 'love interest' who constantly is against fighting despite being picked on and harrassed by bullies...and even tells Lee Jin Sung to stop fighting WHILE he's being beaten the shit out of. I'm sorry hun, you're stupid.

Lee Eun Tae (Vasco): Someone who once got relentlessly bullied like Park who decided to train to fight back. Now he absolutely hates every handsome person and thinks they are evil taken straight from text. (I think the author specifically has a vendetta against handsome people).

In regards to Choi Soo Junh and Lee Tae Sung, I did not address them just because that would make this review longer and I doubt anyone is still reading at this point.

Really the only redeeming quality about this work. It's decently drawn. So if you have extra time you feel like throwing into the abyss, I guess give it a try. If you like watching fight scenes between a wuss who cries as he misinterprets what is going on then somehow ends up knocking out a 3-time WWE world championship wrestler with one punch go ahead...

but the only 'art' you'll really see is fighting.

The author deleted my previous 3 reviews, all being decently analytical. I do not know why he felt the need to delete them as some of them were actually nice reviews granted this absolutely abismal manwha. If it were a manga, its only saving grace would be from reviewers who were only looking at it for its bullying extent and not the full picture.

This webtoon, while having a very exciting storyline, also manages to bring light to the difference in treatment people receive, just for looking a certain way... as I was reading it, I began to realize that, without even wanting to, a part of me had become like the bullies in the webtoon who picked on the unattractive kids.. Although Im someone who tries to treat everyone equally regardless of their appearance and quirks, and although Im someone who has had unattractive friends before, Ive realized, after reading this, that even if I dont show it on the outside, I tend to look at people a certain way at first simply because of the way they appear.. I believe its normal for humans to be like that, since its impossible to judge people by their personality when you first meet them, however, while reading this webtoon, Ive come to the resolution, that even if I continue judging people based on appearance, I will not think of someone negatively just because they are unattractive... I believe this webtoon has made/will make me into a better person and I REALLY hope the english chapters start getting updated faster since Im dying to continue reading this webtoon...

Hwaiting to the author of this amazing webtoon, Park Tae Joon!

For me, liking Lookism was more of a journey than a natural occurring.

I started reading this in 2017, in my native language. The website I read from stopped translating and I was left waiting for more. For more than a year, my views of this story were the same: Lookism was a enjoyable, but not standout, webtoon. Aside the sympathetic protagonist, it still had some of the biggest turn offs for me: hyper-sexualized female characters, who were there to be damsels in distress, sidekicks convenently strong and unbeatable, etc.

I realized how wrong I was when I went back to reading it. And heres why.

You can physically feel how the story and artstyle grows as you read through the chapters. I noticed that while re-reading — the initial artstyle is completely ugly compared to the actual. You can get used to it, but now (around the last disponible chapters), its so much prettier and expressive (not only the characters, but also the scenary).

Giving 10/10 because of how much it developed.

Its beautiful. I don't know how else to explain it.

Its beautiful, well written, has nice extra stories, every character has some depth and the ones who don't still weren't fully fleshed out. The protagonist grows so much, the sidekicks grow so much... And eventually, as if the author realised they are also characters, the girls grow so much. Even Haneul (who is still an airhead), who is the embodiement of female rivalry and dullness at the start, grows.

The story grows more and more serious as the chapters go. We learn who which character is, through straight up chapters entirely dedicated to them, or through small sidestories. From adapting to life at a new city, with a new body and new friends, the protagonist goes to getting involved in some serious shit which I will not spoiler.

I am trying to not spoil anything in this review, so, let's go to the important part:

Everyone has a reason to do what they do. Their views of the world and why they fight is, if I remember well, 100% justified. Even if it is for a silly reason, like fighting for their friends (the protagonist), defending their crews's views (Vasco), or just straight up beating someone, everything is connected to something those characters have gone through. Well, everyone, except one character who was basically created to be a bully (not hard to spot who).

Even some of the background characters are shining now (around chapter ~229). The pace of the story is accelerating and some pieces of the last chapters are gathering together.

I will be totally honest with you. I went from "not caring about this story at all" to "absolutely loving and cheering for it". If you can get through the slow start and the blatant female sexualization from the initial artstyle, you will notice you're reading a gem of a webtoon.

On my first read, I would prob have given this around 5/10. At maximum. But now? I won't give it a 10/10 only because I recognize the plot and pace aren't flawless.

If you give it a try, I hope you find it as enjoyable as me.

A lot of people probably underestimate it this manhwa because of it's real. It describes a very real situation of a very fat student. Of course it shows him getting bullied. People that read up to chapter 3 thinks it's only about the mc getting a girl but, it's about the mc(park hyung suk) dealing with the people who had bullied him.

honestly I'm dissappointed how this manhwa turned out, When I was reading this before I rated it for myself as 9 and most arguably the most entertaining manhwa from that moment, It tackled a lot of issue but at the same time it tackled it in a way that is very unique, up to the point where it's a mixed of every genre out there. But ever since the gang shit came in at about hundreds of chapters or so it kinda lost tracked. I dont hate the gang violence and shit, but it still really grew to be a manhwa far worse than what it was. Also it came to the point where the antogonist or different characters are taking too much time out of the manhwa where one character can take 40 chapters in his back story. Once we had a slice of life with mixed genre with horror, cultist and etc stories now we have a one directional gang violence that characters taking 70% of the whole manhwa. I actually dropped it already, If you liked the first hundred chapters then you'll hate more the next hundred because you wont get the same feeling after.