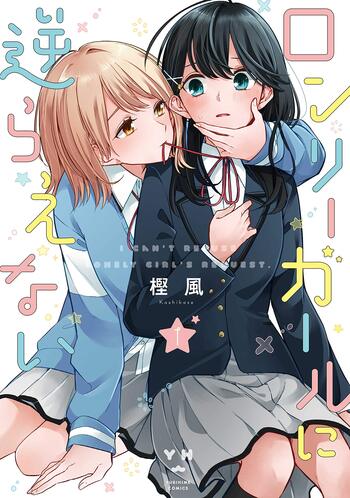 Reading this yuri manga called Can’t Defy the Lonely Girl. So far, it is a cute read. It is about a high school girl named Ayaka Sakurai who gets anxious when taking exams. As such, she ended up going to a lesser high school. Then comes the teacher asking her to convince a delinquent girl to come to school. That girl, Sora Honda, agrees to come to school, but in return for “requests.” So it’s that kind of manga.

Ultimately speaking, I am enjoying reading the manga, but at the same time, it tragically falls into the same issues that works like Hino-San No Baka; Even If It Was Just Once, I Regret It; and Snake Woman and Offering-Chan where the relationships between the lead characters start off on shaky grounds. It’s not as bad as the other two, but still, it is somewhat hard to overlook. EIIWJO starts off with the landlady trying to elicit sex from her in return for paying her rent. Essentially quasi-prostitution. Snake Woman is literally about a young girl being made a slave for the eponymous snake woman, but I will relent that it was more akin to a sacrifice, but that nevertheless still has unfortunate implications. I don’t feel like I need to get into ones like Hino-San or Citrus as both of them had their own problems.

Sakurai is literally blackmailed into having to tend to each and every request Honda makes with the first one even being a surprise kiss. Sure all of their interactions are played as adorable, but it’s kind of hard to not acknowledge that this is only happening because Honda blackmailed Sakurai, kind of ruining the adorableness. I guess to me it plays off more as an obligation rather than an actual relationship.

The characters are pretty likable except for one. Sakurai is cute and dorky with how much she idolizes her older brother. She is also pretty awkward when around Honda particularly when she is unable to understand her feelings for her.

Honda comes off as unlikable and kind of a burden to Sakurai due to forcing her to do requests in return for her going to school. But as the manga continues, we learn more about her and slowly but surely, we do get to see the reason as to why she fell in love with Sakurai, to begin with.

The supporting characters are also fun. There’s Sakurai’s group of friends. Honami is the social butterfly who is really energetic. It’s also cute that she wears overalls and one of the straps are undone accentuating her Genki Girl tendencies. Chizuru Koike holds Sakurai in high regard due to her being their class president. Yuina Minami thus far doesn’t have a defining characteristic yet, but she’ll probably grow more as the series continues. Then there’s the teacher Ms. Egawa. She is probably the worst character in the manga. She is the one who forces Sakurai into a deal to bring Honda to school whilst dangling her letter of recommendation in her face. She seriously has no shame and has the habit of popping out of places.

The artwork is also pretty good. It emphasizes the cuteness quite well.

Otherwise, a good read, if you kind of look past the blackmail. If you like this work, then you would also love Hino-San No Baka because it also has a class press having to do another delinquent’s demands. For more ecchi works, I recommend  I Like OPPAI Best In The World! due to its similar premise.