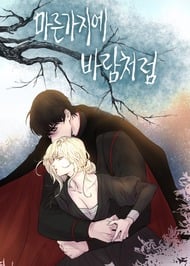 As plague and turmoil afflicts the empire, enchanting widow Rieta Tristi finds herself at the mercy of a malicious nobleman and his dying wish to have her buried alive beside his corpse. The plague has taken her husband, slave traders have taken her young child, and now her own life is at risk -- until an unexpected visit from the empire's outcast prince changes everything.

I'm intrigued by the setting and plot of the webtoon. It has a slight melancholic mood to it, befitting of a medieval period when the plague is rampant.  Plot: As of chapter 17, there isn't really any romantic development, which suits the story well. That doesn't mean there's no interaction between them at all. There are nice gestures and natural interactions that develop their relationship... just not much in the romantic direction yet. The webtoon is well-paced, and keeps me yearning to see how the story unravels. The schemes are written well, and the feud between the Empress and the Duke is certainly interesting to read. The dialogue between them is superb, and feels like knife-play behind smiles. Quite fitting with the medieval mood. Characters: Rietta, the female lead, is timid at first glance. That is realistic given the hard life she has lived. The difficulties she has faced are also realistic, and is something expected to have happened to a commoner in medieval times. However, the story isn't a pity party for her either. The overall mood I get from her is "I have suffered much, I recognize that, and it is what it is," (kind of the same vibes as Edna from Light and Shadow). She isn't the type of strong female protagonist you'd expect in a webtoon, but more like the type of internally strong person you might meet in real life. She seems weak at first glance, but as I watch her soldier on, I realize she's strong in a different way from "sword-fighting strong". Ah, also, she has a small (maybe not small... the story's hinting at more than just small) bit of divine power. So that's an interesting aspect of the character too. Archduke Axias, the male lead, isn't an asshole. He's a firm duke for sure, but in no way is he a ruthless man. When the webtoon explains it, I see the decisions he makes are reasonable. After all, the medieval period is "kill, or be killed." He treats his subordinates well. A slight thing I don't like is that he can be blunt. His "harem" isn't really a harem... read it and you'll see. As of chapter 17, there's been no sex, no "I bought you so serve your master well" stuff. He gives off "cold duke" vibes, but doesn't harm people for no reason. Overall, he's a respectful dude.  The women in the harem are all welcoming (except one). They and Rietta bond like sisters. Art: The art is very good, and suits the story well. The first chapter has one panel where Rietta has asymmetrical eyes and sometimes the lips look a bit weird, but other than that the art is great throughout the story. Rietta is drawn especially gorgeous. I'd recommend you read this if you're looking for a historical romance with a mature feel to it. I'm quite confident the webtoon will continue to have good plot development. Also, the legal and free official English translation is here: https://webtoons.com/en/fantasy/like-wind-on-a-dry-branch/list?title_no=2405

This Manhwa just keeps getting better. I have pretty low standards in terms of what I will tolerate when I'm reading, and this story was right up my alley when it comes to setting and tropes. However, once the story picked up, it surpassed any expecations I had. I am only 28 chapters in, so keep that in mind. The writing in the story has been magnificent so far, but the real meat of the plot itself feels as if it is still unfurling. We've gotten a good amount of backstory for both the main characters, a decent establishment of the rest of the players (including the antagonist,) and an inkling of what's to come. The characters are often more important to me than the plot (as they carry it), so as long as they're established firmly, I can wait to see what's to come. The conversations between each character often mean more than they say, and most of the relationships are more complex than one word could describe, despite there being so many characters and connections at play. Both protagonists, as well as the antagonist, have in-depth personalities that are well crafted and refreshing to see. Rieta is not the typical energetic, cheerful, punch first badass FL, but her "weaknessess" and personality sprout directly from her history, which is so important to me. It would be easy to overdo her personality and omit strength entirely, but it is balanced so well, and we are able to watch her growth. The Archduke would also be easy to mess up and make too cold and cruel, leading to a toxic relationship, but despite the rumors and his standoffish personality, he never crosses that line. The romance will likely end up slow burn, but I have faith that it will at least be somewhat healthy, which can't always be said. This is then topped off by a complex antagonist, who, while I might understand, I do not root for. The antagonist is not simply evil for the sake of conflict, but has issues rooted in the story.  Aside from the wonderful character relationships there is also the art. The art is clean and not so stylized it's jarring. As many Manhwa do, there are times where pieces of the background are not drawn, but edited in to save time (although I'm not exactly sure how that is done.) Unlike others, however, those shortcuts are taken tastefully and not overdone. The artist has foregone extensively detailed backgrounds to keep the style consistent, and when a shortcut is taken, they take the time  to ensure that it does not draw too much attention. Getting excited that the food and silverware on a table are hand drawn might sound weird, but it does so much for the submersion of the reader and it endears me to the creators. Overall, the story and characters have me emotionally invested, and I would recommend anyone a fan of this genre to read it.

Please, please, please give this a read if you have the time. It is honestly, hands down one of the best mangas I’ve ever read. I came in expecting some wish-washy romance at the start and within 30 chapters felt a plethora of emotions and almost cried (ALMOST). The story is amazing and the art perfectly portrays the emotions of each character beautifully. Please give this a read, it will not disappoint. It’s simply captivating. I don't usually do recommendations but I just had to for this masterpiece, once again, do give this a read.