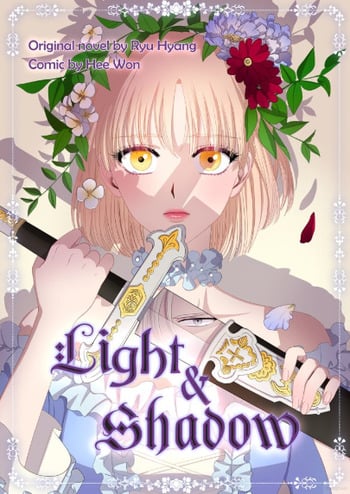 Akatsuki no Yona is definitely my favorite manga of all times, but Light and Shadow's Edna reminded me a bit of Yona. Both are strong female leads with beautiful eyes. These ladies are from noble birth and know how to devise strategies and how and do everything in their power to protect the things and people they care about. If you like one, big chance you'll also like the other!

Both feature a strong female lead from the former royal family who is in hiding after the throne is usurped during a rebellion. These characters seem weak at the beginning, but are eventually shown to be very confident and strong, with great leadership skills. Both are well-loved by their followers. The setting for both stories is in an imaginary, "historical" kingdom, with plenty of policies intrigue to move the plot along.

Both female MCs are princesses that have been chased out of the castle for different reasons. Outside the palace, their initial goal was merely survival. But as they come across the various problems of the kingdoms they were suppose to rule, they pledge to do their best to help the citizens.

Both have strong and smart female lead characters. Both have more knowledge/skills than they should in subjects that one wouldn’t expect from them. Both stories have standoffish or mean male characters that the main character is supposed to marry who seem to soften because of her. Also both stories are not set in today’s time period but rather in the past.

Both stories are recommended to read! Both lead MC's are strong willed, smart and magnanimous to the people in their community ❤️❤️ Both have learned from their past mistakes and regrets, making it right with their current situations and circumstances~ Although L&S is not 'isekai' in genre but DE is. BOTH ARE VERY GOOD STORIES YOU WILL TRULY LIKE 😁

The protagonists of both manhwas are talented and reasonable in many ways. Both story lines provide the similar feeling too. I highly recommended to read both if you like either of them.

What drew me in to both of these amazing series were the intelligence and strength of the female leads. I loved both of these stories and admired their character.

Both mangas have strong female protaganists that are good at fighting and swords. Both settings are in historical time. There is no love triangle in any of them either.

Both have a strong female protagonist. That gives as good as they get. Personally I like Adonis better just because there's more story to work with. But both give you that romance/adventure that you'll be looking for in a story.

Chang An in the Tang Dynasty of China (618-907): The demon star is passing through the sky, calamity is about to befall the Tang Dynasty - because of a woman. Skilled in martial arts and war tactics, Princess Li Cheng Ge sets out to avenge her family and take back the throne.

Both manga have amazing, strong female heroines from noble birth. Both used to/dress up as boys. In Light and Shadow, female MC Edna is only kind towards all people around her. She is determined to make her city a better place. In Song of the Long March, female MC Li Cheng Ge sets out on revenge.

If you like some politics, strong female leads with handsome & cool partners, both manga are great for you!

I found it similar because

Playboy Petruchio accepts the request to seduce the unfriendly Katerina...?

Dian is a former street orphan working as a maid for her benefactress, the daughter of Marquis Rowen. To help her lady escape from an unwanted marriage to a man more than twenty years her senior, Dian sends her out the country and assumes her identity, going to the castle of Margrave Evenhart in her stead. The Evenhart family, famous for guarding the North for generations without ever leaving their territory, is a subject of great mystery to the outside world. Will Dian’s identity be discovered? What romantic story will unfold in these days of cohabitation?

The premise for the plot is the same: a lowly maid in disguise is sent to marry a noble for the sake of a lady. Although the reasons are very different, they end up in the same situation.

The useless maid, Marie, has never been able to do anything correctly. But, after caring for a dying prisoner, she becomes a person she had always wanted to be. This is the start of the capable maid, Marie.

The female lead in A Capable Maid does not have battle skills, but both protagonists showcase admirable characteristics and both are hiding their identity.

One day, Rose comes to the Arden family, who are poor countryside nobles. Apple decides to become Rose’s maid to assist her, and takes part in the audition full of conspiracies...