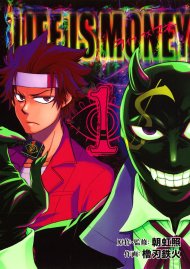 I decided to read this manga because I saw how short it was. I thought that it would be a quick read, and I would use it as a way to pass the time. Haha, universe. You're so funny. Story: Fukurokouji Meguru's sister is dying of heart disease, and his fundraiser-gone-wrong has shattered his hopes. Desperate, he agrees to join a shady lottery-style game to earn the money to pay for his sister's procedure. Unfortunately, this is actually a high stakes game--survive psychological torture among ten other people for ten days, and you're rich! Lose, and you lose not only your mind, but your life. Oh, but the game is simple. Roll a die every day, and the number shows which of the five senses you lose (the sixth side meaning that your senses are cleared). Plus, the arena for the game is the equivalent of a fancy hotel! This game sounds like the greatest thing ever, right? Right? Guys? I'm not going to lie: This story is thrilling, and the psychological battles are quite fun to watch (and well-written). (The premise is a little unoriginal and ridiculous, though.) I was loving this manga, but one thing was always weighing down on my mind: The manga could easily run for way more than 15 chapters. Oh, yes. Yes it could. This brings me to the main flaw of this manga: The ending brings "rushed" to a whole new level. About 8-or-so chapters are condensed into 5-or-so PANELS. I am dead serious. I DESPISE the ending of this manga even now as I am typing about it. I wonder if the author got bored? I don't care. It's just... really, really awful. Enough to ruin the score for this section. Art: The character designs are as generic as they come (the overweight pig, the sexy girl, the bishounen...), but the horror is good. There is very little gore in the manga, but the characters' descents into madness are well-illustrated and worthy of praise. Other than that, there isn't much to be said about the artwork. Decide if you like the artwork for yourself: Oh, yeah--there's some VERY mild ecchi thrown in for the sake of... fanservice. If this turns you off, I'm sorry. It shouldn't be a big deal, but I thought I'd warn you. Then again, I suppose that the fact that the aforementioned bishounen is often gagged could be considered female fanservice. Or maybe it's just my fetish... who knows... Characters: Due to the DAMMITDAMMITDAMMIT 15 chapters, few backstories are revealed, and very little development occurs. I think that from now on I am going to include manga pages or screenshots in place of a picture of the characters. Fukurokouji Meguru: He is your typical shounen hero with a more sympathetic motivation. He wants to protect the girl he loves (and the love is a little unbelievable--they fall in love after four-or-so days?) and doesn't want to harm anyone... heh. (Heh. Heh. Heh.) Overall, he is pretty bland, but he becomes a complete badass and makes for one of the greatest moments in this manga, and maybe in any manga. Kukuri Momoko: She is rather annoying, and her ample bosom becomes an object of attention. However, I wouldn't be surprised to hear that someone likes her as a character; she has some good moments. Oh, and her ending is a little... wait, I don't want to spoil. Black Tapia: The masked overlord of the game. He does not seem evil, but he does not seem good either. He is a rather ill-written villain, in my opinion. Aiyori Aoshi: Despite the fact that he bears an uncanny resemblance to Shido the Pedo of "HotD" infamy, he is actually an eerily intelligent, leader-type character. If he had been given time to develop of explain his past, he would have become much more likable. He is still a good character, though. Amazono Daisuke: He's hot. That was the only think I noticed up until he had a brilliant psychological battle with Aoshi. Unfortunately, what could have been a great character (in more ways than one) was not fully developed. Stupid world. Niko Akira: He's a mild perv up until this one moment. If I continue, I will likely spoil something or another. Utsuromiya Fuyumi: Another character destroyed by the shortness of the story. Shirakogawa Romero: The obligatory sadist who thinks that making people listen to KoRn is torture. WHAT? Actually... Everyone else: The same as Utsuromiya. The characters would be much, much better had they been developed. However, they are pretty good considering the circumstances. Overall: This manga is WAY too short, and I kind of hope that the creators redo it, making it longer.

The story itself is original but it was done in a very generic fashion, it seems like the author didn't know how to make the most out of the concept he created. The art is very simple and tries very hard to look like Kaiji in tense situations with characters deforming grotesquely. The characters are what you would expect in a story like this, nothing special. All in all, for being short and if you would like to read something Kaiji like I would recommend it, otherwise only if you have nothing better to read.