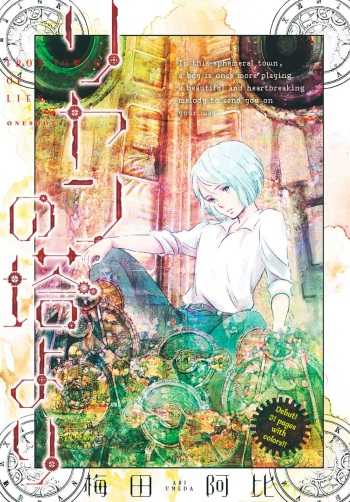 I really like the way the coloring to represent the "auroras" is done in the first few pages, with texturing and prismatic splotches acting as undercurrents beneath the main imagery. Most of the manga is in black and white though, which was a bit disappointing. The architecture of the underground city had a melty candle feel. Pieces of art and relics from the past play a role in this story, acting as reminders of the world that had once existed on the surface, with the clocktower and the pieces of old-timey music which the boy plays being the most central reminders of the past. Honestly, the daily life and economic structure of the underground city wasn't portrayed very well, which made the worldbuilding feel incomplete. The plot is also kinda weird in that it sorta feels like a slice of life journal entry about this girl's worries about the upcoming migration to the surface and that transition, but it also feels like it was trying to create a sense of grand significance to the climactic piano scene (as though what the boy was doing was somehow revolutionary or thought-provoking). Was the boy just trying to give the girl a jolt of courage or was there more to it than that? And the arm aspect--while aesthetically cool--did feel a bit melodramatic, and also only added to my confusion as to what exactly was going down.